ANT-Hiroshima has been co-operating with Hector Nihal, director of the Aids Awareness Society in Pakistan, who requested assistance in a peace education initiative for schools in Lahore, Pakistan.

Hector organized a poster competition as part of his peace education initiative, “Say No to Nuclear Weapons.” The peace edcuation initiative was originally scheduled to be on 9th August 2014, to commemorate the dropping of the second atomic bomb, on Nagasaki.

However, the event had to be postponed as the venue was at Model Town, Lahore, was where a rally and demonstration at the beginning of Tahirul Qadri’s “Inqalab March” was being held.

The event was held on 6th September instead, and went off successfully.

A total of ten schools took part along with representatives from various NGOs, religious leaders and political parties.

The posters made by the students were put on display, as were the educational posters that were supplied by ANT-Hiroshima.

The participants appreciated the courage of the people of Hiroshima and Nagasaki as they struggled to recover from the destruction in a spirit of Peace and forgiveness while moving ahead to rebuild their lives and communities. 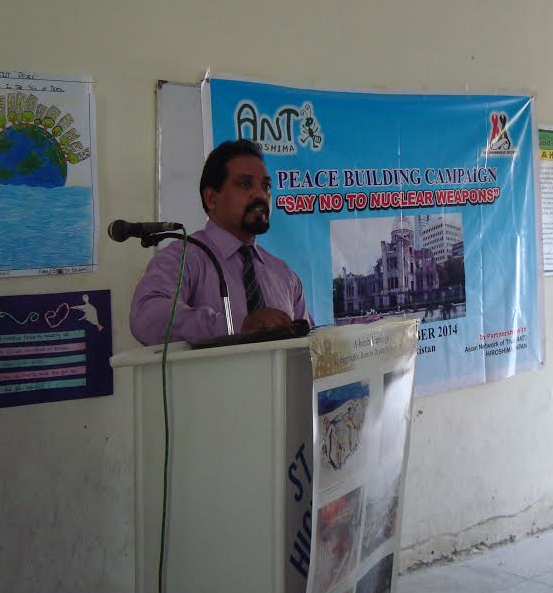 The school children received certificates of attendance and gift copies of Sadako’s Prayer.

The school principals offered their full support and cooperation for future peace programs in their schools to educate younger generation about the importance of peace and the effects of weapons of mass destruction.

On behalf of participants we are grateful ANT and its team for providing this opportunity to organize a program on this important topic. – Hector Nihal