This is a brief outline of some of the key points extracted from the annual report  of the Basic Health Unit (BHU) in Shamshatu in the village of Baghbanan in the Peshawar district of Pakistan. The period covered is from 1st July 2011 to 30th June 2012.

Patient turn out exceeded the planned milestone of 15,000 patients by more than 20%.
A 50 KV transformer was installed; two social mobilizers, a nutrition assistant were additionally employed.
A BHU specific software program was developed and installed, and BHU’s stock record and patients’ medical records were computerized.
Training of the BHU staff has taken place. The project staff was also trained to use the new IEC material, social mobilization questionnaires and also to conduct health and hygiene sessions at schools.
Patient fees were increased in April 2012 to help ensure the sustainable future of the unit, althoughit is acknowledged that the available funds of the local population are extremely limited. In cooperation with the community and the staff it will be decided in the coming months how to proceed on this issue to achieve a reasonable pricing policy.
The number of visiting patients to the nutrition unit increased, in spite of a drop off in visits during the summer, and from July 2011 to June 2012, 3,112 children and 783 pregnant and lactating women were treated and given nutritional supplements, and the percentage of malnourished women and children decreased. 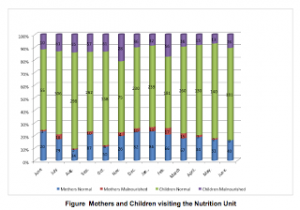 During the reporting period, the project staff conducted 44 health and hygiene sessions in different schools of the surrounding area and distributed 6,000 leaflets among the school children and the visiting patients. The staff also pasted 150 posters in public places during the period July 2011 – June 2012. 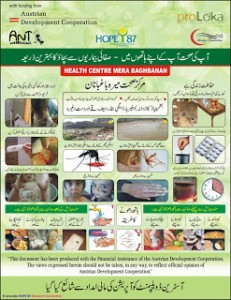