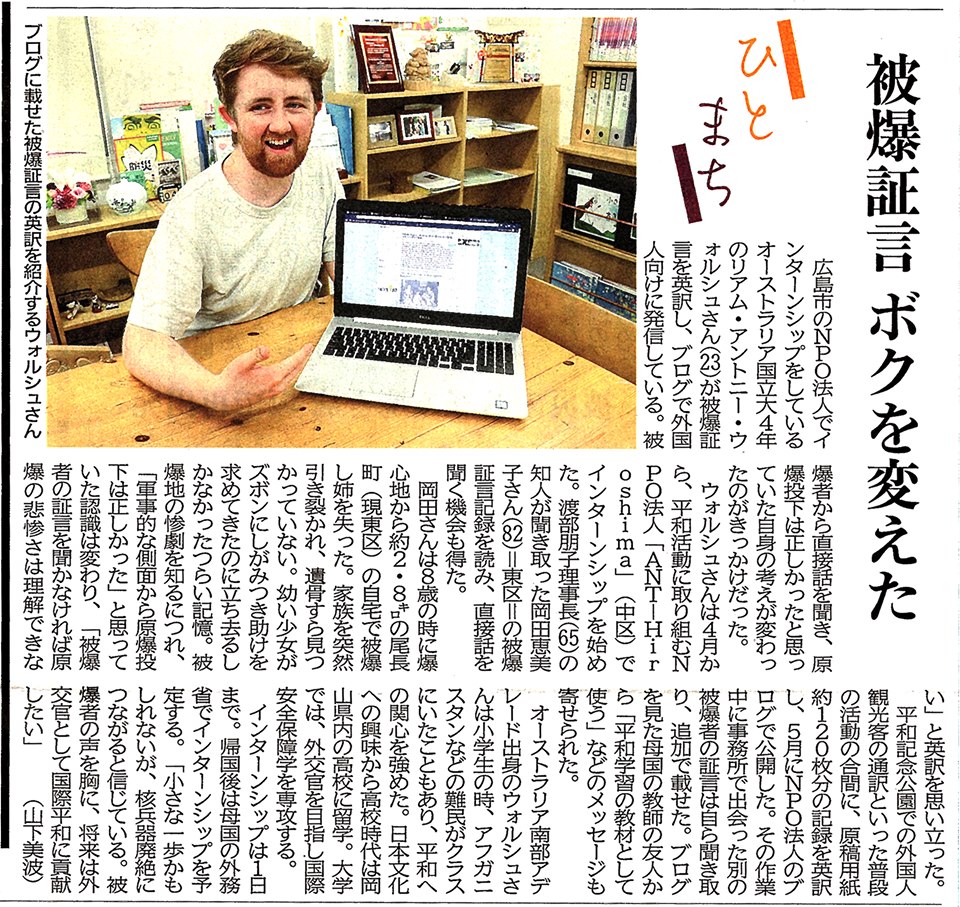 An Australian 23-year-old from Adelaide who lives in Okayama speaks fluent Japanese – in Hiroshima-ben (the dialect of Hiroshima). This is ANT intern, Liam Walsh, a fourth-year student majoring in International Security and Japanese at Australian National University.

After spending two months every day commuting by bullet train from Okayama, Liam finished up the internship at ANT-Hiroshima two weeks ago and said goodbye to colleagues at his farewell dinner, “it has been a great experience. It has been too fast.”

Liam left his legacy of the two-month internship on ANT-Hiroshima’s English blog site – a  four-part English translation of Hibakusha (A-bomb survivors)’s personal story, Ms. Emiko Okada after spending hours and hours with Ms. Okada, who experienced the Atomic bomb at the age of eight and lost her elder sister on the day of the bombing.

On the first day at ANT, he didn’t really know what he could or wanted to do; however, “the second day at ANT, Tomoko-san gave me the Japanese version of Okada-san’s story. After hearing her story in person at lunch, I was just wondering how such a tragic thing can happen to such a lovely person. I became really interested in translating her story and decided to do it then.”

Earlier this year with still about two months left on his student visa Japan after completing a one-year exchange program at Kyushu University, Liam thought why not use this time to do something related to his interests in nuclear policy and peace. Nothing came up with google search of  “Japan peace activities”. Then, he switched “Japan” with “Hiroshima” and ANT was the first thing popped up. After meeting with ANT Director, Tomoko-san, in January over Okonomiyaki for lunch, Liam made up his mind to intern with ANT.

Aspiring to a diplomatic career, Liam is paving his road little by little to be able to influence Australia’s nuclear policy in the future. “Nuclear weapons, I don’t think that should exist in the world. But just saying that doesn’t give me any power to change it. So I came to Hiroshima to hear people’s stories and see the effects nuclear weapons actually had, then gaining the knowledge that I can actually use to convince people that nuclear weapons should not be a thing in the world.”

Australia, as the largest known Uranium source in the world, is the third-ranking producer of the nuclear energy source, following Kazakhstan and Canada.1 Uranium mined in Australia is said to be sold only for electrical power generation or nuclear research under strict International Atomic Energy Agency safeguards. Regardless of whether uranium mined in Australia is possibly used for nuclear weapons production, there are many opposing voices in the country that the federal government’s intention to expand uranium mining industry is hurting the environment and health of the citizens.

“I have always thought about nuclear policy in Australia. Even when I was little, they were all talking [on media] about peace, peace, peace… or nuclear weapons should not be a thing. But at the same time, many of the world’s nuclear weapons were built from Australian uranium, and we export to countries which are not signatories to the NPT. I always found that contradictory,” said Liam.

It was also the incongruity of Australia’s actions on nuclear matters that sparked Liam’s interests in national security at a young age. “In my primary school in Victoria, there was a class called ‘logic’. We were given newspapers from three different companies written by different people but about the same issue. We had to go into the articles, see where they were different and where their biases were and try to find where the truth is. One day, we were given articles on nuclear policy. Everything was contradictory.”

Liam started his journey with the Japanese language after visiting Japan for the first time in 2012 and came back for a one-year exchange program in Soja, a small city in Okayama Prefecture. Mastering a language is a commitment and Liam has overcome many obstacles living in Japan. “Coming to Japan, of course, I was interested in going overseas, interacting with people from different cultures. I wanted to become a diplomat, have Australia known overseas and build relationships. Australia and many Asian countries are more like trading partners rather than friends. Then, I prefer going down the road more of friendship rather than the one simply about money.”

“The cross-cultural communication skills.” Liam spilled an answer right away when asked about his biggest gain from ANT for his future career as a diplomat, “actually being able to work in an office setting in Japan, meeting with people all around the world.”

Later this month, Liam will return to Australia and start an internship working in foreign affairs in Canberra. He expressed anxiousness about heading back to Australia but stated that he was keen to make sure the lessons of Hiroshima were heard far and wide.