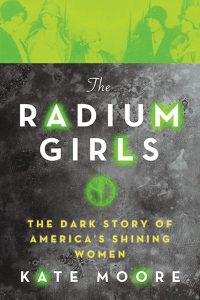 People have suffered the harmful, debilitating, and sometimes lethal effects of radiation since its discovery, since before its true destructive power became widely known. In her book The Radium Girls: The Dark Story of America’s Shining Women, British author Kate Moore illuminates the lives — and gruesome deaths — of two groups of women who worked with radium in the 1910s-1930s.

Around the turn of the century, radium was thought to be a miracle cure for many ailments. It was used in hospitals to treat tumors, but “radium water” and other fad products were also popular. Radium, mixed with paint, was also used on watches, clock faces, and other dials because it glowed in the dark. This industry boomed during World War I, when demand for soldiers’ watches and dials used in military machinery sharply increased.

In the US, young working-class women, often with immigrant backgrounds, were hired to paint dials. They were instructed to use their lips to shape the brush hairs into a fine point — every time they did so, they ingested the radioactive paint. Once inside a person’s body, radium makes its way to the bones and stays there. With a half-life of 1600 years, radium continuously bombards its victims with radiation from the inside.

After a few years, a number of women who worked or used to work in the radium dial factories began falling ill. They complained of toothaches, but after a tooth was pulled, the wound refused to heal; the infection would spread, leaving women toothless, with fractured jaws and flowing pus. Others had painful backs and eventually required the constant support of a metal brace, as the radium ate away at their spine. Still others developed huge tumors, called sarcoma, on various parts of their bodies. Most victims had a combination of these symptoms and were in constant pain. While many of the women died, others were merely handicapped for life.

Because radium was thought to have only positive health effects, at first the women — and the doctors they consulted — didn’t realize the cause of their illness. Even when they did finally understand that their health problems were due to their work, the radium companies refused to take any responsibility or provide any financial compensation. They did their utmost to discredit the women and their allies. Residents of Ottawa, Illinois, gave the ailing dial-painters in their community no support when the women sued their former employer Radium Dial Company — the radium business brought much-needed jobs to the little town. (Incidentally, radiation that seeped into the ground from the Radium Dial plant in Ottawa still contaminates part of the town, and cleanup efforts are ongoing as of 2015.)

It was only in the 1930s, roughly 20 years after some of the women had worked in dial-painting factories, that they finally saw justice under the law. One group of dial painters in New Jersey, led by a woman named Grace Fryer, who spent two years searching for a lawyer to take her case, reached an out-of-court settlement with the United States Radium Corporation. Later, a woman named Catherine Donohue and her former colleagues won their suit against Radium Dial Company in Illinois.

Many women and their families lost all their savings to doctors’ bills and hospital visits. Those with children, like Catherine, sometimes were forced to hire help to take care of their families, despite their already nonexistent funds. For these women, the money gained from suit or settlement meant saving their family from debt or providing for their children’s future. However, it rankles to think of the value of a woman’s life in financial terms; no sum can equal their lost friends, family members, or good health.

In Radium Girls‘ epilogue, Moore mentions that the dial-painters’ experiences even had an impact on the Manhattan Project. Glenn Seaborg, a scientist working on the project, was one day “suddenly struck by a disturbing vision [of] the workers in the radium dial-painting industry.” Seaborg championed high, nonnegotiable safety standards for those working with radioactive materials in the Manhattan Project. Seaborg knew that plutonium, used in the project’s fusion bombs, behaves similarly to radium: It settles in the bones of those exposed to it.

After the end of World War II, the US Atomic Energy Commission called the dial-painters “invaluable,” writing, “If it hadn’t been for those dial-painters, the [Manhattan] Project’s management could have reasonably rejected the extreme precautions that were urged on it and thousands of workers might well have been, and might still be, in great danger.” While the scientists and workers may have been kept safe, no such compunctions were felt for others involved in the production, testing, and use of nuclear weapons in the days, years, and decades that followed the successful completion of the Manhattan Project.

Although Moore is admirable for paying tribute to the dial-painter’s impact, her conclusion whitewashes the US’s (and other nations’) real relationship with radiation. The radium girls may have finally received compensation for the injury done to them by their employers, but to this day people live and die with the effects of nuclear industries and receive little in the way of compensation or assistance.

Everyone should read Radium Girls. Moore brings her subjects to life and does not spare readers horrifying details about the effects of radium poisoning. The book tells a true story of women’s strength and determination to speak truth to power.