Chitarkari & Banyans – the Pursuit of Identity 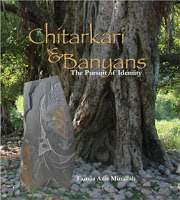 In Chitarkari & Banyans Fauzia explores the roots of her creative identity in her own past and the now threatened cultural diversity of Pakistan.

Fauzia has graciously given us her permission to publish an extract from Chitarkari & Banyans. In this extract Fauzia recalls some early memories and the role of painting and art in her early life and reflects on how different those days were from the situation in Pakistan today.

As such, Chitarkari & Banyans is an eloquent plea for a more tolerant and culturally diverse Pakistan and for the preservation of Pakistan’s rich cultural and natural heritage.

My earliest memory is a flashback of running towards my mother Amai, who was absorbed in her painting during a lesson with the most esteemed artist of Peshawar, Sahibzada S. Hyder. This was in Peshawar in 1966; I must have been a little over three at the time. So my very first memory of Peshawar is related to a painting.

After a posting in Quetta, we returned to Peshawar in 1973 where my father was posted as Chief Secretary. I used to attend painting classes along with my mother at the Abasin Arts Council, in those days a cultural hub where classical music was taught along with painting. Hyder Sahib was our instructor. It was at this time that my parents identified my talent for art. In fact, my artistic talent gave me special licence that exempted me from doing household chores!

I had my first solo exhibition at the Abasin at the age of 17. Working with children now, I do not encourage them to look for recognition at such a young age since it may well prevent the artist from growing and exploring further. But looking back, it heartens me that my father, who died in a car accident only a year after my exhibition, was present at my debut to witness the fruits of his encouragement.

Although I was referred to as an “artist” early in life, I cannot claim to be one. The work I do is inspired by the whole range of cultural influences I have experienced. I am greatly indebted to the artists and craftsmen of history, and it is of the greatest importance to me that my work should help transmit appreciation for their work and its continuation. This is especially the case in an increasingly commercialized art world where artistic talent needs to be sustained by sharp marketing skills and business sense. Moved by aspects of our culture which are fast disappearing, I have painted or carved without a view to the market. The time that needs to be spent on negotiation I have spent working on art projects with children, and for the conservation of traditional skills and natural beauty. These activities I take as seriously as my creative work.

But I love art and even more now that I see it vanishing in much of Pakistan – both the art of galleries and the splendid art of nature. I have always been fascinated by the earliest artists of Pakistan, who as early as 300,000 – 1 million BCE had the aesthetic sense to embellish gigantic boulders with imagery destined to be shared with generations to come. The work of the chitarkars of Hazara, the wood carvers of Chitral and Kohistan, the historic structures of cities such as Peshawar and Lahore, all have been sources of inspiration for my work as a painter and carver.

Pakistan is going through difficult times. Growing extremism has not only worsened the security situation in many parts of the country; the threat it poses to the practice of art and the preservation of culture means the imminent disappearance of the marvels created by man. In the cities where I grew up, the threat is growing. While a handful of Pakistani artists are doing very well in the international art market, in cities like Peshawar, the art scene is practically dead. Peshawar is no longer the Peshawar of my childhood, where the Abasin Arts Council once thrived. Artists from Peshawar are now compelled to hold their exhibitions in Islamabad.

It is sad that the artistic soul of Peshawar is at risk considering that this city, once called Purushapura, was the capital of Gandhara after it was shifted from Takshashila (or Taxila). Gandhara was known for the distinctive style of Buddhist art, which developed out of a merger of Greek, Syrian, Persian and Indian influences. The 3rd century sculpture known as “Fasting Buddha”, now on display in Lahore Museum, is the finest example of Gandhara art.

When I recently met the well-known artist of Peshawar Jehanzaib Malik, he told me how difficult it is for artists working in Peshawar to sell their work. Tayyaba Ahmad, former head of the art department at the university of Peshawar, told me that female students could no longer go outdoors to do landscape painting, even on campus premises, without being harassed by extremist students. Sardar Mohammed Arbab, a well-known sculptor, has given up his art to concentrate on calligraphy. Most heart-wrenching was the murder of a student of Peshawar University by students belonging to a religious party: his crime according to the extremists was playing the guitar in his hostel room. 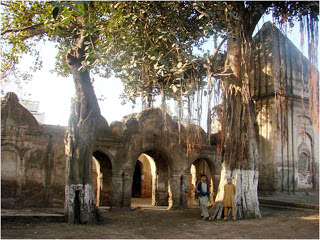 In 2009, I revisited the walled city of Peshawar, known as undroon-e shehr, which is where my mother spent her childhood after her parents moved from their village of Sirikot in Hazara. Our childhood had been filled with stories of her own blissful childhood in this quaint area: the hidden treasures of the Sethi Mohallah, the once bustling musicians’ bazaar in Dabgari, the Hindu temple, Ghor Khuthree, whose conservation is now being promoted by the Sarhad Conservation Network and Frontier Heritage Trust. The temple’s unique brick cell work is being conserved by skilled artisans but how vulnerable this old structure is to the destructive tendency of extremist vandals. Will the children in the photograph grow up to value their past?

it is hard to believe that it is the same city of my childhood, the same city where my mother as a young medical student at the Khyber medical college or as the wife of the Deputy Commissioner and later Chief Secretary, was never compelled to wear the white chadar in public spaces that has become a uniform of women in Peshawar. My husband Temur also spent a good part of his childhood in Peshawar. His mother Helga Ahmad was a keen promoter of the Sethi Mohallah. In 1974 tourists from abroad could be seen in trousers and skirts visiting the area. Even until 1993 it was possible for Helga to take her German friends to Undroon Shehr without any fear of suicide attacks. My father was also a student at the Islamia College.

After five years of Mutahida Majlis-i-Amal MMA’s rule under the so called ‘secular’ Musharraf, Peshawar literally turned into a cultural desert. Lately the ANP government has taken welcome steps in reviving the cultural scene of Peshawar. What is more important is that a number of cultural events include women, but it will take years to bring back the relative openness which my mother or my mother-in-law experienced in Peshawar.

However, there is a ray of hope in the fact that Peshawar is more accommodating to minorities than Islamabad is. While the social elite of Islamabad don’t feel a tinge of shame in gorging around the historic Hindu temple at Saidpur, in 2011 the Peshawar High Court ordered the reopening of the 160-year old Goraknath Temple at Gor Khatree to allow devotees to worship.

The court gave the order after hearing a Hindu woman Phool Vatte’s plea, whose husband Pandit Kambhu Ram owned the temple and had pleaded that his land should not be made Waqf property during the Partition of the Indian sub-continent.

Earlier petitions seeking worship at the temple were rejected by the Peshawar High Court and a civil court. In 2011 the Peshawar High Court chief justice turned the application into a petition on a suo motu and allowed for worship to be carried out at the temple. This is nothing less than incredible, considering in Islamabad the Hindus, very much Pakistanis, cannot even dare to worship in the once-sacred Hindu temple at Saidpur, and the self-proclaimed enlightened, ‘minority loving’ social elite of Islamabad is too busy gorging ‘tikkas’ and paninis around it.