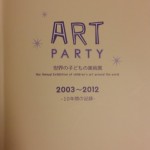 Art Party was a benefit art exhibition held in Hiroshima every December to support children in need in Japan and many other countries.

Pictures created by children in orphanages, shelters and other facilities, were displayed in a gallery in Hiroshima city centre and sold for a minimum donation of ¥1,000. The proceeds were then returned to the participating children’s groups as donations.

Over the ten years that Art Party exhibitions were held, over ¥4,800,000 was raised in donations for 58 children’s groups in 34 countries. 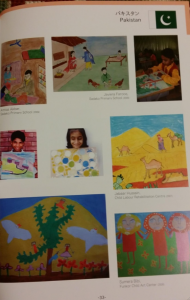 The children’s pictures served as “windows” into their lives, communicating  their sorrows and joys in ways that directly touched the hearts to those who visited the exhibitions. At the same time, having the opportunity to raise money through their own efforts helped strengthen the spirit and confidence of the children involved.

The volunteers who helped to organize and run the exhibitions, many of whom were students and young people, were also strongly affected by their experience of Art Party.

When I first had the inspiration for this charity exhibition, back in early 2003, it seemed like a dream. How could I possibly realize such a large project? But then a friend led me to the door of Tomoko Watanabe, and everything changed. I still vividly remember the first time I met Tomoko, when ANT-Hiroshima was still small. When I explained the Art Party idea to her, I expected that she would at least hesitate over the size of the challenge, but no, she gave me her million-watt smile and said, “Okay, let’s do it.” And Art Party was born.

Now that the project has come to an end, ANT-Hiroshima has published a booklet to commemorate the achievement. The booklet documents the participating countries and organizations, the amount and type of donations received, and shows a selection of the art works created by the children in each of the participating countries, and photos of some of the exhibitions and volunteers.

Please contact ANT-Hiroshima if you are interested in obtaining a copy of the Art Party commemorative booklet.

Adam Beck is the webmaster at: http://bilingualmonkeys.com/