“Whatever devastation we had assumed, it was worse. There can be no substitute for the way a toddler looks at you, desperation and desolation etched in the very pupils of his eyes. When you look at a sea of children who look old and so fatigued, it can shatter the very fabric of human stability.” – Aliyeh Khaleeli.

On 4th September 2010, ANT-Hiroshima friend and supporter, Fauzia Minallah, organized a group of young volunteers to distribute special gift packs to almost 1,000 school children who had been affected by the recent floods in Pakistan.

The Eid gift packs consisted of an item of clothing, a sketch book, pencils, a pencil sharpener and a ball, as well as a copy of the peace education book Sadako’s Prayer. Biscuits and milk were also distributed. 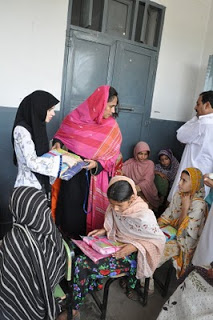 You can read a full report and look at many more photos on the Funkor Child Art blog.