Since 2011 in Pakistan, Children’s Literature Festivals have been held as a response to low levels of literacy and an educational culture that inhibits the development of creativity and literacy.

Wherever a Children’s Literature Festival has been held the response has always been very enthusiastic, even in those areas of Pakistan where security and law and order remain under threat.

At the most recent Children’s Literature Festival, held in Islamabad in the middle of May, ANT-Hiroshima’s friend and collaborator, Fauzia Minallah – founder of the Funkor Child Art Center – showed her animation Amai Loves the Music of Pakistan.

Fauzia reports that the video was well received by the children, who began to dance to the music. The video featured songs in Pashto, Punjabi , Sindhi, Balochi and Urdu, sung by the students of Almaktoom Center for the visually Impaired.

The children were presented with copies of Sadako’s Prayer, written and illustrated by Fauzia Minallah and published by ANT-Hiroshima. 🙂 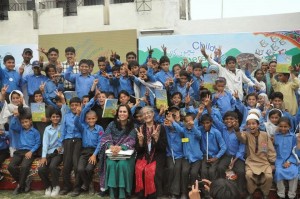