Hiroshima Day was observed in a small village in Assam State, India 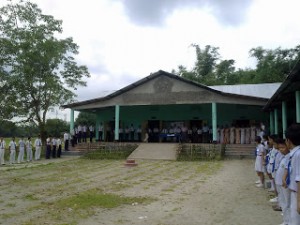 On 6th August 2010, Hiroshima Day was observed in a small village in Assam state, India. The event took place in the local school and about 500 students took part. Students from nearby schools, teachers and a few local dignitaries also participated in the events.

The main objective of the event was to raise awareness among the school children of the necessity of peace in our lives and in society as a whole.

A symbolic human chain was made, oaths of peace were taken, and various other events such as lectures and a documentary film show were scheduled. 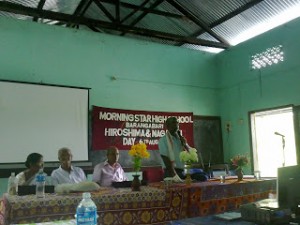 Professor Kshriradhar Boruah, a National Science award winner, was the chief guest of the day and Professor Rana Hazarika, Dept of Chemistry, Biswanath College , Assam was a guest of honour. Professor Boruah and Professor Hazarika interacted with the students and explained about present nuclear world and discussed the recent India-US nuclear deal. They explained about the positive use of nuclear power and their discussion attracted a large audience, which participated with great enthusiasm. 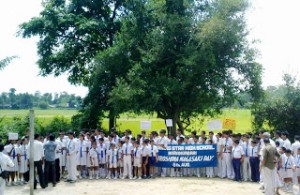 Stephen Okazaki‘s documentary of the A-bombing of Hiroshima, White light-Black Rain, was shown. The audience of villagers and students was very surprised to see the celebrations in America when Japan surrendered shortly after the A-bombs were dropped. It seemed strange that in the same world thousands of people were dying in one part and at the same time hundreds of people were celebrating in another part. Many in the audience had tears in their eyes.

After that there was a peace rally in the small township in which students and local people participated.

We would like to thank Anup Kumar Sarmah, of the Karuna Trust, ILDC, Assam, India for organizing this event.

Anup came to Hiroshima on a visit organized by the Asian Health Institute earlier this year. He took back with him various information materials including a DVD copy of White Light/Black Rain because he wanted to show it to people in Assam so that they would be able to realize what is the outcome of a nuclear attack. 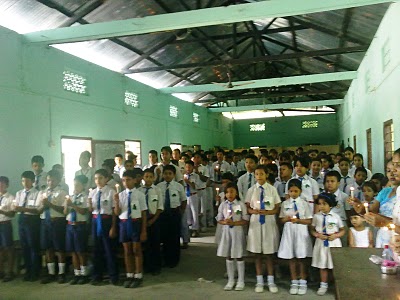