A 10-day peace Training Programme for Young Leaders took place at the Ifugao State University in The Philippines from 7th to 16th February.The theme of the training programme was “Postwar Reconstruction and Peace Building,” in the wake of conflicts between the Philippine government and Muslim separatists on the island of Mindanao in the south of the country, as well as a more widespread conflict with communist guerillas across the country.Over 160,000 people were killed and over two million people were forced to flee from their homes as a result of the conflicts in The Philippines over the last decade, exacerbating the widespread poverty that was one of the causes of the conflict.

Last year a delegation of Philippino Youth Leaders came to Japan as part of a peace study group. Earlier this year Tomoko Watanabe of ANT-Hiroshima visited Mindanao Island as part of a fact finding tour and ANT-Hiroshima hopes to become more involved in peace and reconciliation work in The Philippines as a result. 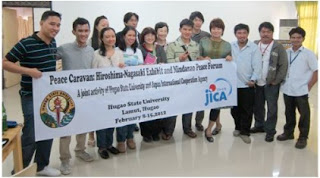 The photograph, left, is of a group of volunteers at the  who are representing the Hiroshima-Nagasaki Exhibit and the Mindanao Peace Forum in Ifugao, in The Philippines.

The activity was a joint effort organized by JICA (Japan International Cooperation Agency), Ifugao State University and various Japanese and Philippino NGOs such as the Cordillera Green Network.

A group of Hiroshima residents also took part in the activity as “resource personnel” who helped with the various lectures during the ten day event.