Nagasaki Day Commemorated At A School In Assam, India

Anup Sarmah is the coordinator of the Karuna Trust, a health development charity, visited ANT-Hiroshima in September 2009 while in Japan on a trip organized by the Asian Health Institute Nagoya.
Anup sent us a report about how a school in the Sonitpur district of Assam marked Nagasaki Day this year.

Greetings from Assam, the land of tea in North East India.
A day long program was organized on the occasion of Nagasaki Day on 9th August 2012 at Barangabari village in the Sonitpur District of Assam. It was conducted at Morning Star High School, a leading educational institute in Assam. 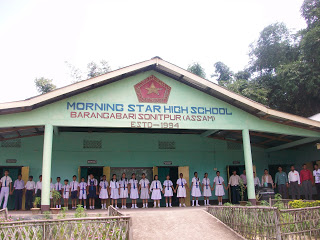 Mr Jadav Chaliha, the Chairperson of the school took part in organizing the initiative with me, and thanks to his efforts the program was successful. We also invited students, teachers, lecturers and well-wishers to join in the events. Altogether 600 students participated in the program.

The program started with the making of a human chain with all the students and teachers. An oath was taken by the students in which they promised to maintain peace in society. They also paid homage to all the atomic bomb victims of both Nagasaki and Hiroshima. Candles were lit and students prayed for the well being of all the people around the world. 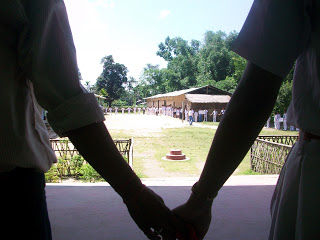 Those events were followed by a power point presentation about the atom bombing of Hiroshima and Nagasaki. Slides included the Hiroshima Peace Park, interaction with the ANT-Hiroshima group, pictures of FAT MAN and LITTLE BOY bomb, and also about Japan. The presentation was followed by the film, White light black Rain. 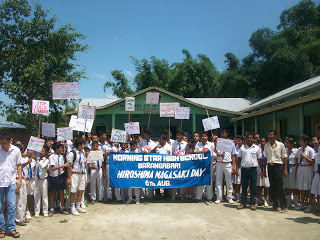 After that, there was a Lecture session on Hiroshima/Nagasaki by professor Durgal Nepal followed by question answer session. A quiz was also held after the lecture session. Four schools participated in the events.
Anup Sarmah

ANT-Hiroshima would like to thank Anup-san for his continuing dedication to the cause of peace education. Anup organized a similar commemorative event two years ago, and we reported about it here:
Hiroshima Day was observed in a small village in Assam state, India