On November 4, Tokyo University of Agriculture Professor Yoichi Kunii, Kuniko Watanabe, and myself traversed the streets, gardens, hills, shrines, and temples of Hiroshima to gather data on hibakujumoku (atomic-bombed trees).

Professor Kunii plans to use his findings to visually represent the trees using 3D computer modeling. His models, in connection with University of Tsukuba Professor Masakazu Suzuki’s articles on hibakujumoku, will allow readers and students to quickly visualize Professor Suzuki’s findings. Creating 3D models of the hibakujumoku that still stand in their original location can clearly show the direction the tree is leaning, the direction of its branches and roots, and any other characteristics that may be a result of exposure to the atomic bomb. Professor Kunii hopes also to bring his students to collect data on the trees. Not only will it be a great learning opportunity for his students, but locals (for example, children at Myojyo-in Nursery, in whose schoolyard stand two hibakujumoku) will learn about the trees through interacting with the researchers.

Click “Continue reading” below for photos and introductions to the hibakujumoku we visited.

Numbers on the map correspond to the trees numbered below.

This ginkgo resides in a respectable and beautiful garden, but it has recently experienced some trouble, probably due to many of its branches being severely cut back. A light grey rash spreads across its underside. Although this tree has historically been the main producer of Green Legacy Hiroshima’s ginkgo saplings, it has yielded fewer offspring in recent years.

Our group also visited a magnificent ginkgo at Anraku-ji Temple. One of its branches grows through the temple’s gate, and the rest of the ginkgo appears unimpeded and prosperous. 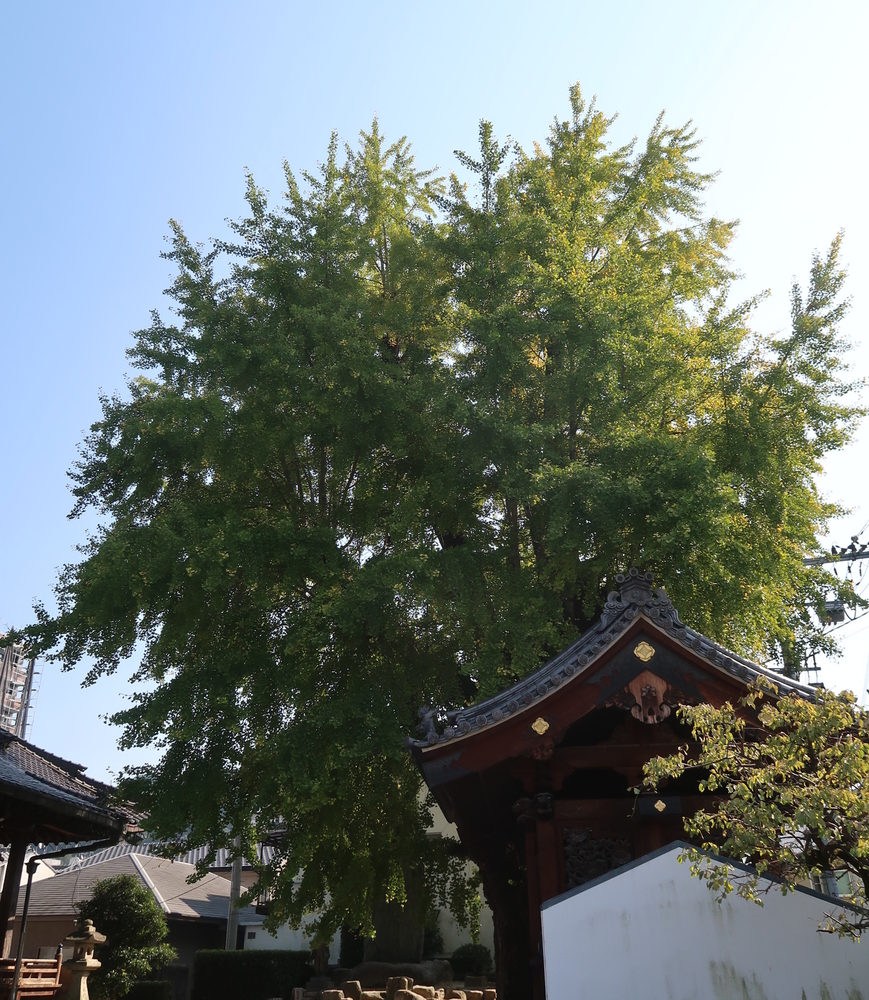 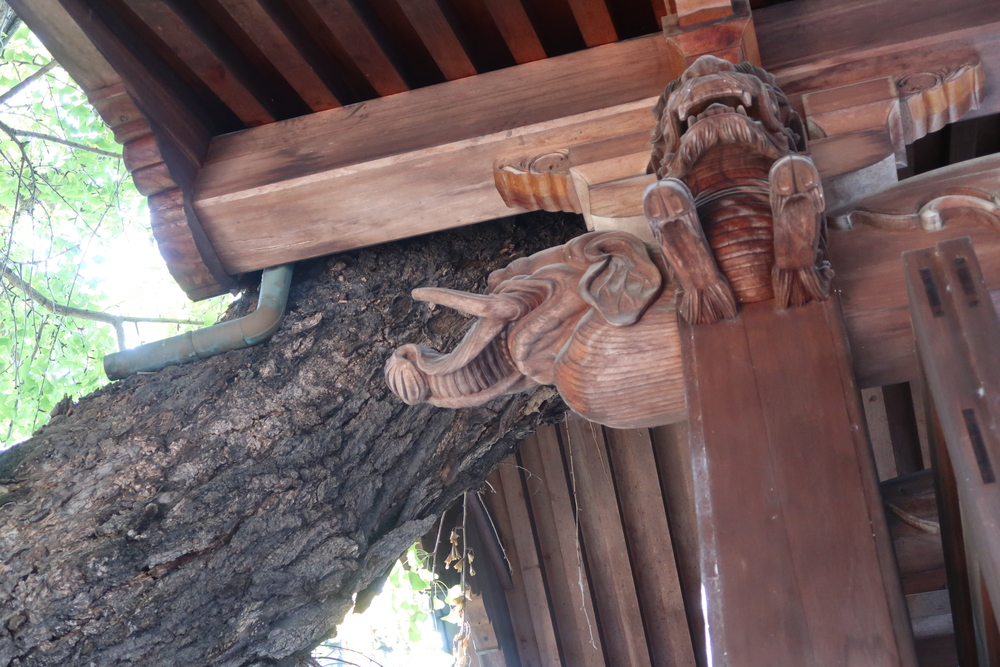 We called on three hibakujumoku living in the vicinity of Hijiyama. The first tree, a cherry, was sporting thin branches growing out of a bandaged trunk. The area around it has recently been cleared of weeds, so hopefully any new shoots coming up from the tree’s base will have enough space and light to grow. 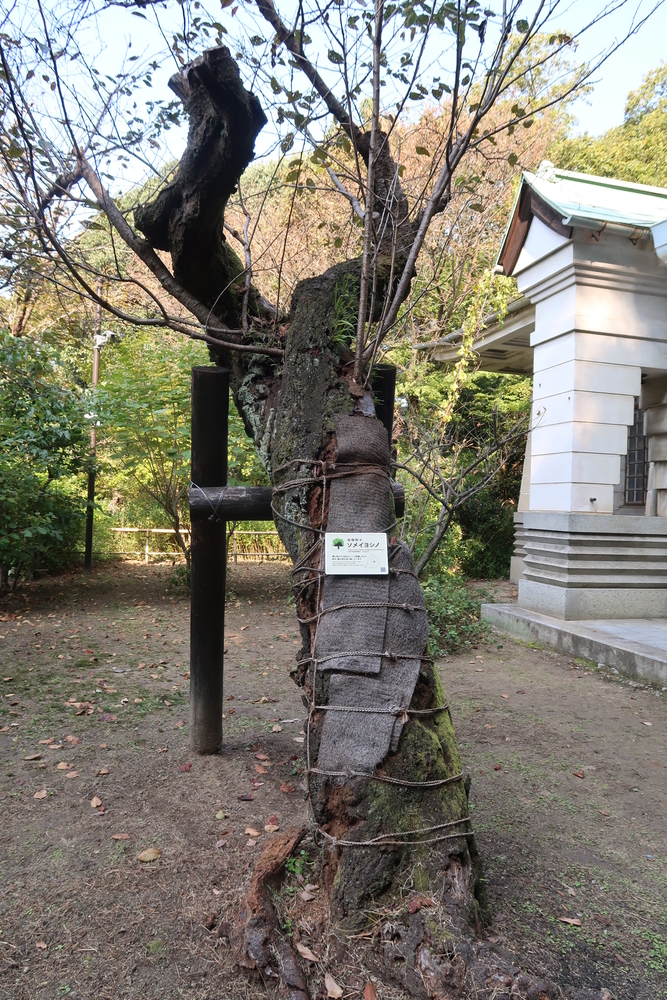 The next tree, a camphor, was one of the largest hibakujumoku we visited. One interesting point about this tree is that its branches spiral and flip, rather than grow out in a straight line. Although not visible in the photo below, the camphor is bordered on one side by a road and on the other by a concrete drainage passageway; the tree’s roots can be seen trying to push under the road and grow over the drainage passage. 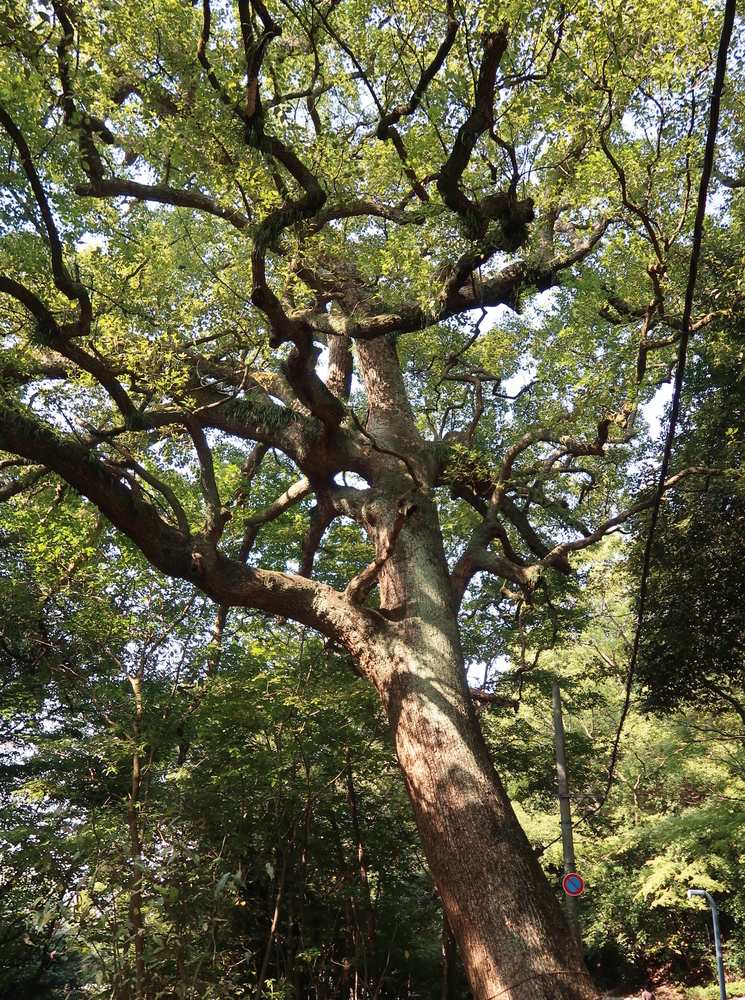 The final tree in the area, a weeping willow, stands on the riverbank at the base of Hijiyama. Its trunk has split in two, with one dead half propped up by supports.

Another group of trees were two natsu mikan in Hiroshima’s Hakushimakukencho neighborhood. Although the trees were producing fruit, many of their leaves were afflicted with some kind of disease. 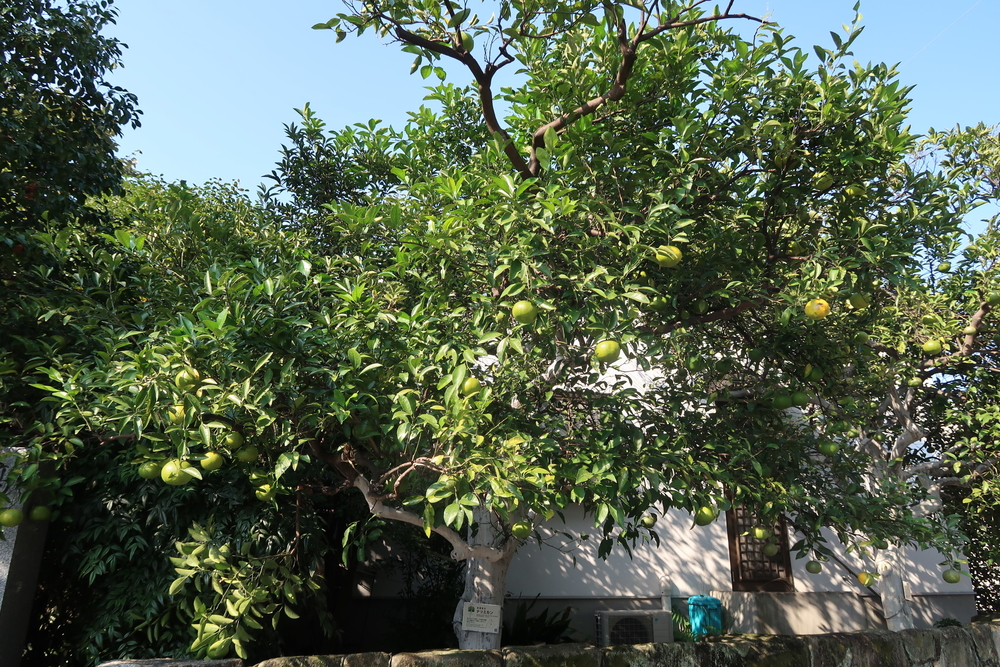 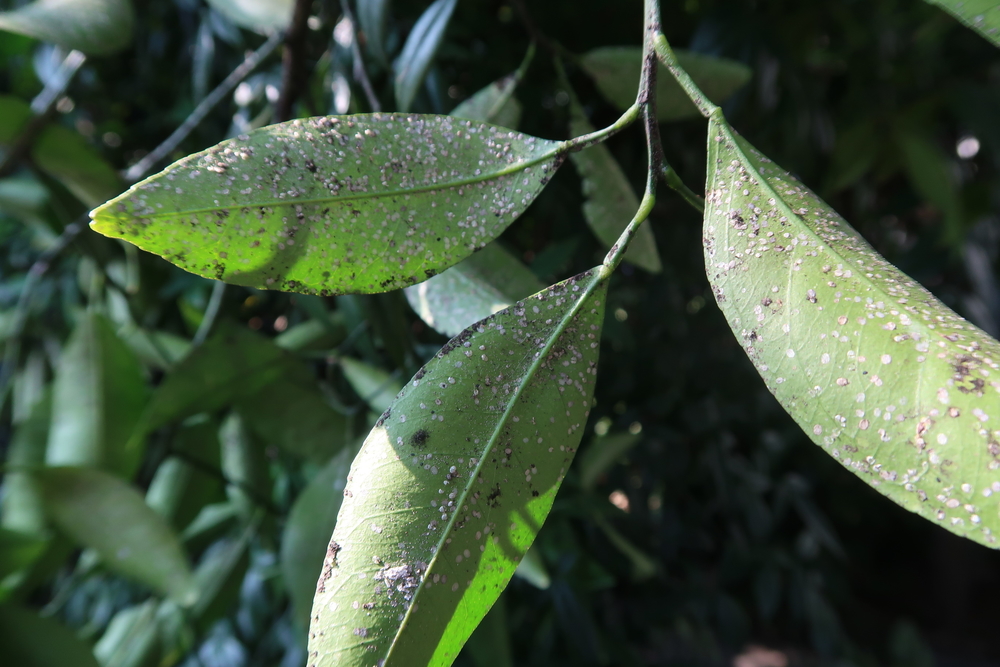 Our next stop was Ikari Shrine, which is home to a cherry and a tabunoki. Neither tree could quite be called flourishing. The cherry, a few meters away from a construction site, is trying to put up new shoots despite the tough conditions.

The tabunoki, also in the shrine’s grounds, was facing problems of its own. Like the cherry, the tabunoki was trying to put out new shoots, but unfortunately the majority of them had been cut back. However, small, young shoots were still visible. The tree’s main trunk contained a cavity near the ground that had rotten away. The final distressing discovery was a fungus growing higher up the tree’s trunk, where a branch had been previously cut away. Fungus is often a sign that a tree is ailing, and prompt action to improve the tree’s health should be taken if one is found.

Myojyo-in Temple and the nursery attached to it have three hibakujumoku growing on their grounds. The first tree, a ginkgo, had browning leaves unrelated to the coming autumn. Is the tree not getting enough water, or is it sick? The other two trees, a pine and a palm, appeared to be doing well.

The final stop of the tree patrol took us to the relatively downtown neighborhood of Otemachi, where a few hibakujumoku are living. One, a shirodamo on the grounds of Honkyo-ji Temple, had also fallen prey to fungus. 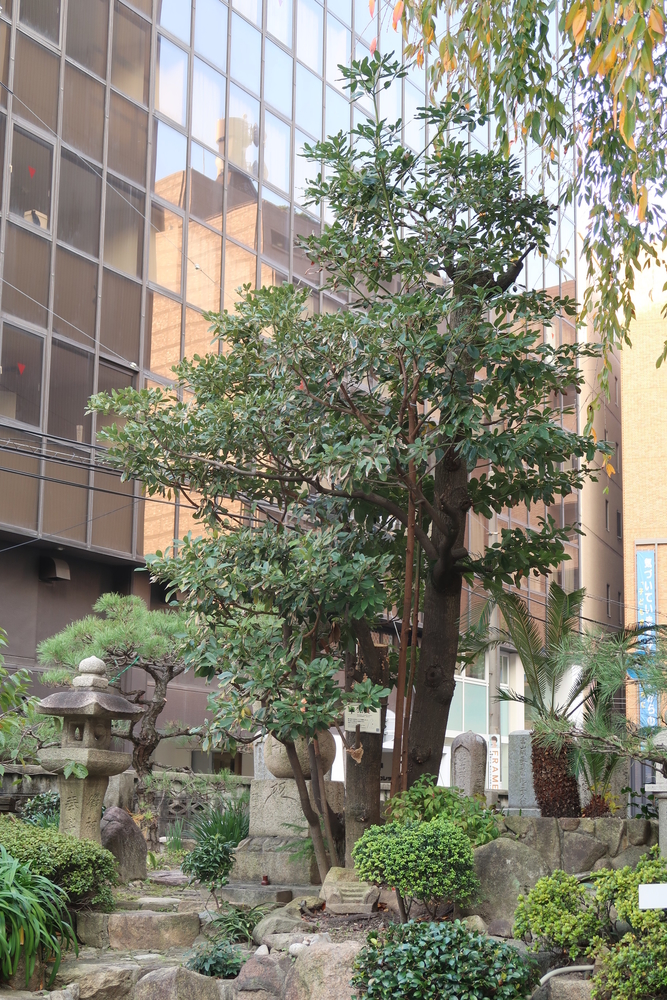 Kuniko said the hibakujumoku’s existence itself is “peace” and that the trees make us realize what is truly important in life. However, human indifference and ignorance injure them.

Trees need care, just like people; the hibakujomoku are growing old and often getting sick, just like the hibakusha. We can’t expect the trees to thrive under any and all adverse conditions, even if they have already survived an atomic bomb. While the hibakujumoku’s recovery from destruction may seem like a miracle of the natural world, retaining these inspiring trees takes work and watchfulness, like any other activity for peace.

It is the writer’s intention to continue providing updates on hibakujumoku in the future.

More information in English on specific hibakujumoku can be found at Green Legacy Hiroshima’s page (updated in 2013) of UNITAR’s website.

Click here to see Hiroshima City’s list of hibakujomoku in Japanese. The numbers in the first column explain the direction of the tree from the atomic blast, how far it was from the epicenter (in 100 meters), if it’s in its original location (yes: a, no: b), the location, and the number of trees in the same location. For example, N03a1-01 was north of the blast, roughly 300 m from the epicenter, in its original location, location no.1, and the first (and only) hibakujumoku in that location.

Almost all hibakujumoku are identifiable by an attached plate, an example of which can be seen below.