He came from Ethiopia to express solidarity with the people of Hiroshima and Nagasaki in their appeal for the abolition of nuclear weapons and the realisation of genuine and lasting world peace. 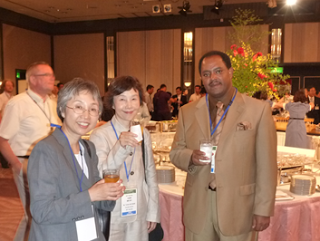 During his stay in Hiroshima, Mussie visited Hiroshima Peace Memorial Park where he laid flowers at the Cenotaph and at the Children’s Peace Monument.

He also attended the Mayors for Peace 7th General Conference in Nagasaki and addressed the plenary session of the conference. He said:

“Abolition of nuclear weapons is an idea whose time has come. We all need to be stakeholders. There should not be another Hiroshima and Nagasaki in any part of the world.

“It is high time for us as citizens of the world to focus on the enormous costs of war and armament and how these resources could be used much better to create a better future for the children of the world, to alleviate poverty, end hunger, do research to find cures for HIV/AIDS and cancer, achieve the Millennium Development Goals, diminish the risks of war and support the effort of peace building throughout the world.”

Mussie returned to Africa with a message of peace from Hiroshima and a mission to publicize the work of ANT-Hiroshima and the Hiroshima-Nagasaki Protocol. On his return, Mussie arranged for the publication of a five page special feature in the August 28th-September 3rd edition of The Sub-Saharan Informer.

In that issue of The Sub-Saharan Informer there were articles on Mussie’s visit to the Mayors For Peace conference on the front page and page three, with messages from the Mayors of Hiroshima and Nagasaki, ANT-Hiroshima’s Tomoko Watanabe, two A-bomb survivors, and the Secretary General of the UN, Ban Ki-moon.