Tomoko-san and Keiko Ogura-san, a hibakusha and the official atomic-bomb storyteller for the city of Hiroshima, visited Pomona College, Claremont, U.S.A., from October 12 to 14 to give lectures on Hiroshima’s history and deliver atomic-bombed tree saplings, a Fuji wisteria and a ginkgo biloba, on behalf of Green Legacy Hiroshima. Pomona College Assistant Professor of Politics Tom Le was the main organizer for the series of events, although other professors and community members were also involved and without whose help the scope and success of the series would not have been possible.

Pomona College put on a number of events leading up to Tomoko-san and Keiko-san’s visit, including poster exhibitions on “Sadako and the Paper Cranes” and “Hiroshima Nagasaki Atomic Bombings,” a lecture on Japanese peace culture by Professor Le, and screenings of the short films The Mushroom Club and On a Paper Crane.

The sapling planting ceremony took place on October 14 at the Sontag Greek Theatre on Pomona’s campus. There were many attendees, and the saplings were planted using a shovel that President Roosevelt himself had used. Tomoko-san felt the college and its gardeners had taken great care of the saplings and that the trees were planted in an excellent location.

“I’m glad my speech appeared to touch the hearts of everyone participating in the planting ceremony,” she said.”I’m sure many people will watch over and help raise the saplings, and I have great hope that this planting is the start of many more chances to reflect on Hiroshima, Nagasaki, and peace.” 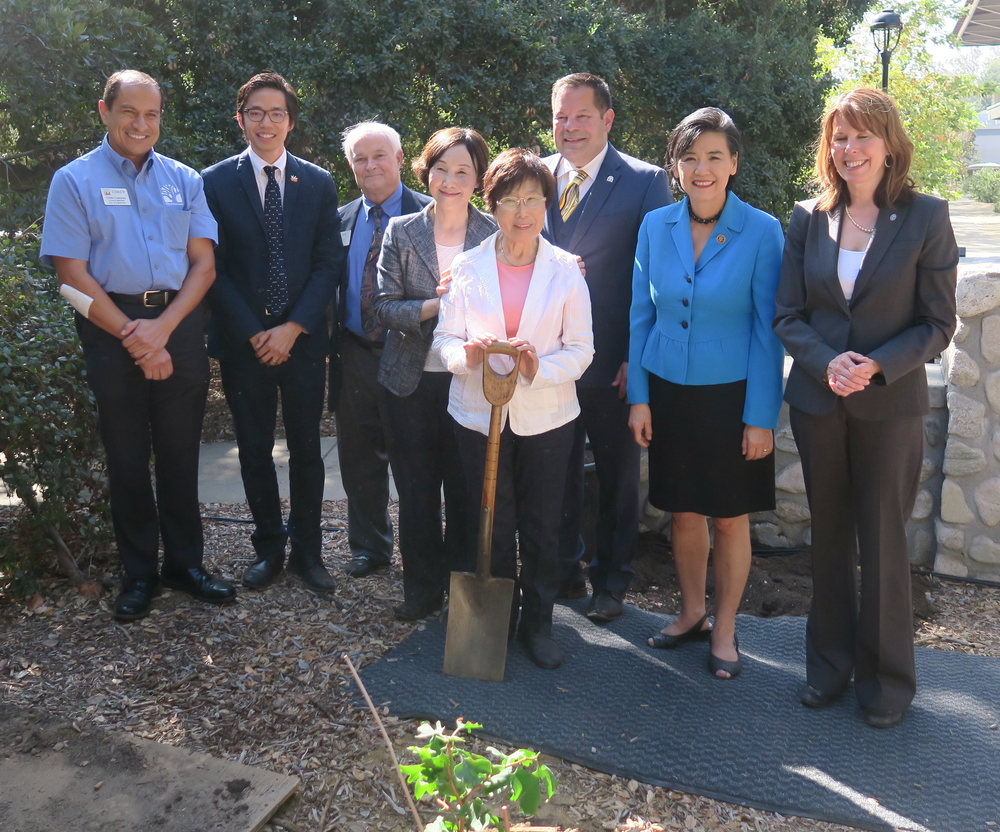 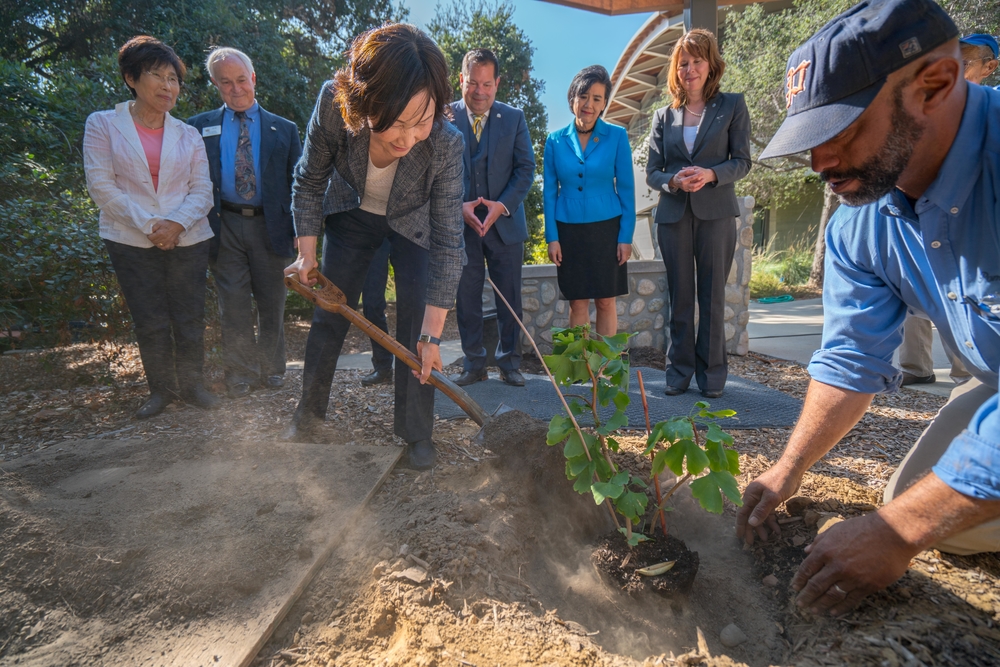 Judy Chu, a member of the U.S. House of Representatives, also participated in the planting ceremony. She awarded Tomoko-san and Keiko-san Certificates of Congressional Recognition on behalf of her office. The City of Claremont also awarded the two women Certificates of Recognition for their invaluable contribution these events.

A masterclass, titled “Peace Culture and Identity: From Theory to Practice” and co-led by Tomoko-san and Professor Le, focused on peace culture, what Hiroshima represents, and ANT and Green Legacy Hiroshima’s activities. Professor Le began the class by questioning basic assumptions about international relations — for example, that relations are anarchic and driven by conflict — and asserting that international relations are often a cooperative endeavor, with morals regulating state behavior as much as national interest. He also spoke briefly about how Japan created its post-war pacifist identity.

Professor Le then gave the floor to Tomoko-san, who introduced listeners to the story of the bombing of Hiroshima and the lasting effects it had on Hiroshima’s citizens, as well as explained the global importance of peace culture. She continued by explaining Hiroshima’s recovery, which, along with physically reconstructing the city, involved restoring human dignity through meeting basic needs and rebuilding hope. She finished by introducing Green Legacy and ANT Hiroshima’s activities and explaining how the two NGOs work for peace and reconstruction around the world. 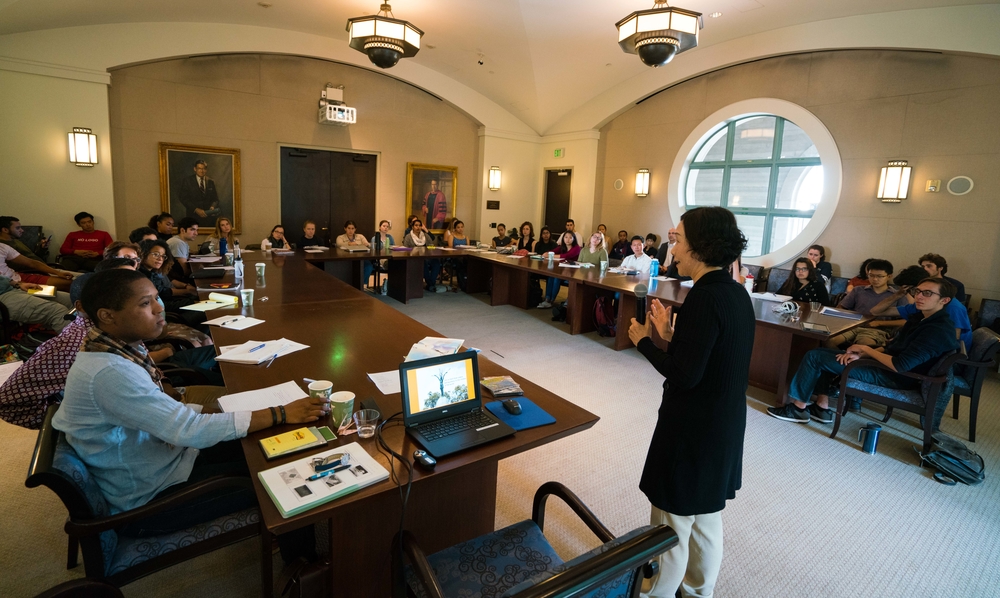 The lecture was followed by a lively question and answer session. Topics included the importance of using art to convey the legacy of Hiroshima and Nagasaki, the strength of young people’s commitment to promoting peace, and the importance of specifically women’s efforts. Many students also commented after the masterclass that they had been inspired by Tomoko-san and Professor Le’s lecture. Tomoko-san is glad the masterclass was well-attended by both students and professors and that everyone benefited from the event. 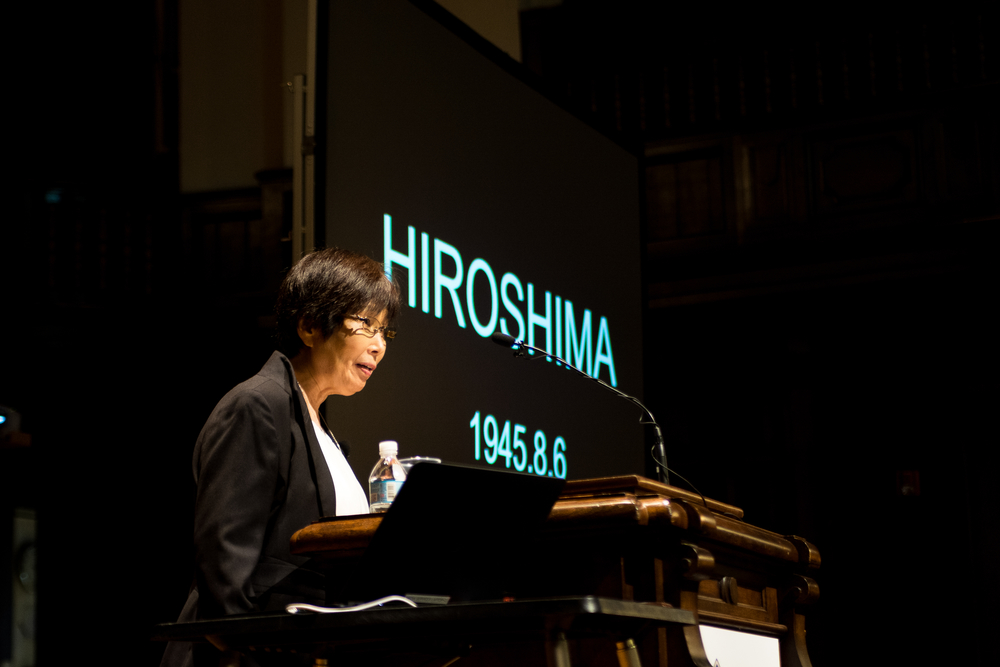 In addition to the official events, Tomoko-san and Keiko-san had many opportunities to talk more casually with students, professors, and the residents of Claremont. Following Keiko-san’s testimony and Tomoko-san’s talks, many members of the community commented that they hadn’t known anything about what happened to Hiroshima and Nagasaki and that they wanted to do something to rid the world of nuclear weapons. Others commented that people must learn humility from history.

Tomoko-san said, “I was very impressed, and I could feel the U.S. changing when I was at Pomona and in the city of Claremont. I want to work together with Americans like these people, and I feel there are more and more people in the U.S., aside from hibakusha living there, who are dedicated to working for peace and changing people’s mindsets and awareness.”

“I hope this visit leads to more study of Hiroshima and Nagasaki at Pomona College and that there are opportunities for periodic exchanges between students at Hiroshima City University and Pomona,” she continued. “Keiko-san and I are thankful that we were able to complete a trip on this scale, and we will make the best use of our experiences at Pomona in our work from now on. We are thankful for the invitation to come to Pomona College and are happy to have made several good friends there.”