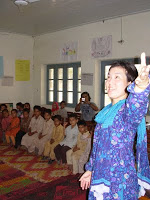 After the earthquake that hit northeastern Pakistan in 2006, a delegation of ANT-Hiroshima representatives visited the area. One of the team, Chika Harada remained in Muzaffarabad until October of that year to help the local people with hygiene control and also to oversea the delivery of sporting equipment to schools in the area.

During that period, about 2,000 copies of the children’s peace education book, Sadako’s Prayer, were distributed to local schools. This initiative led to local people forming an NGO called “Sadako Foundation” with the aim of providing peace-based education to children in need in the area. They built Sadako Primary School with the help of funds provided by Hiroshima citizens through the auspices ANT-Hiroshima.

In a recent report from Chika Harada, now back in Hiroshima, she explains that the school is in serious financial difficulties and she has made an appeal through the Hiroshima Peace Media Center for funds to help the school survive.

Chika Harada (in blue) about to address a class of children at a school in Kashmir.

For further information, please contact the ANT-Hiroshima office at ant@ant-hiroshima.org.