In 2006 ANT-Hiroshima took its peace education activities one step further by publishing its first ever book, a children’s book called Sadako’s Prayer.

Sadako’s Prayer tells the story of Sadako Sasaki, a school girl who survived the atomic bombing of Hiroshima on August 6th 1945, but contracted leukemia as an effect of the bombing.

The story book tells of Sadako’s struggle to live, and how she began to make paper cranes after she heard an old Japanese story that says anybody who makes 1000 paper cranes will have her wish granted.
Sadly, although Sakako achieved her aim of folding 1,000 cranes she succumbed to her illness and died on October 25th 1955. 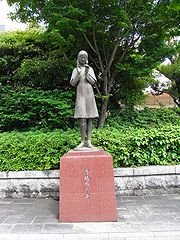 However, she was not forgotten and the story of her fight to survive became the inspiration for the design of the Children’s Peace Monument in Hiroshima Peace Memorial Park. 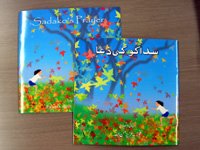 Sadako’s Prayer is illustrated by Fauzia Aziz Minallah, an artist based in Pakistan. Fauzia’s illustrations then became the basis for the text of the story. Speaking about the pictures, Fauzia said,

“I would like people to know that many people in Pakistan are praying for peace. ‘sadako’s Prayer’ is intended to move our hearts in regard to the presence of violence and nuclear weapons.”

The story was written in English. Since then Sadako’s Prayer has been translated into Japanese, as well as into Urdu and Dari for children in Pakistan and Afghanistan. 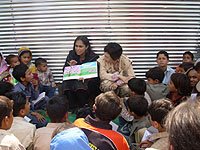 To date, about 3,000 Urdu versions, 4,000 Dari versions and 1,000 English versions have been given away to school children in Pakistan and Afghanistan for peace education. Japanese versions have been distributed to Japanese schools in Japan and around the world.
ANT-Hiroshima