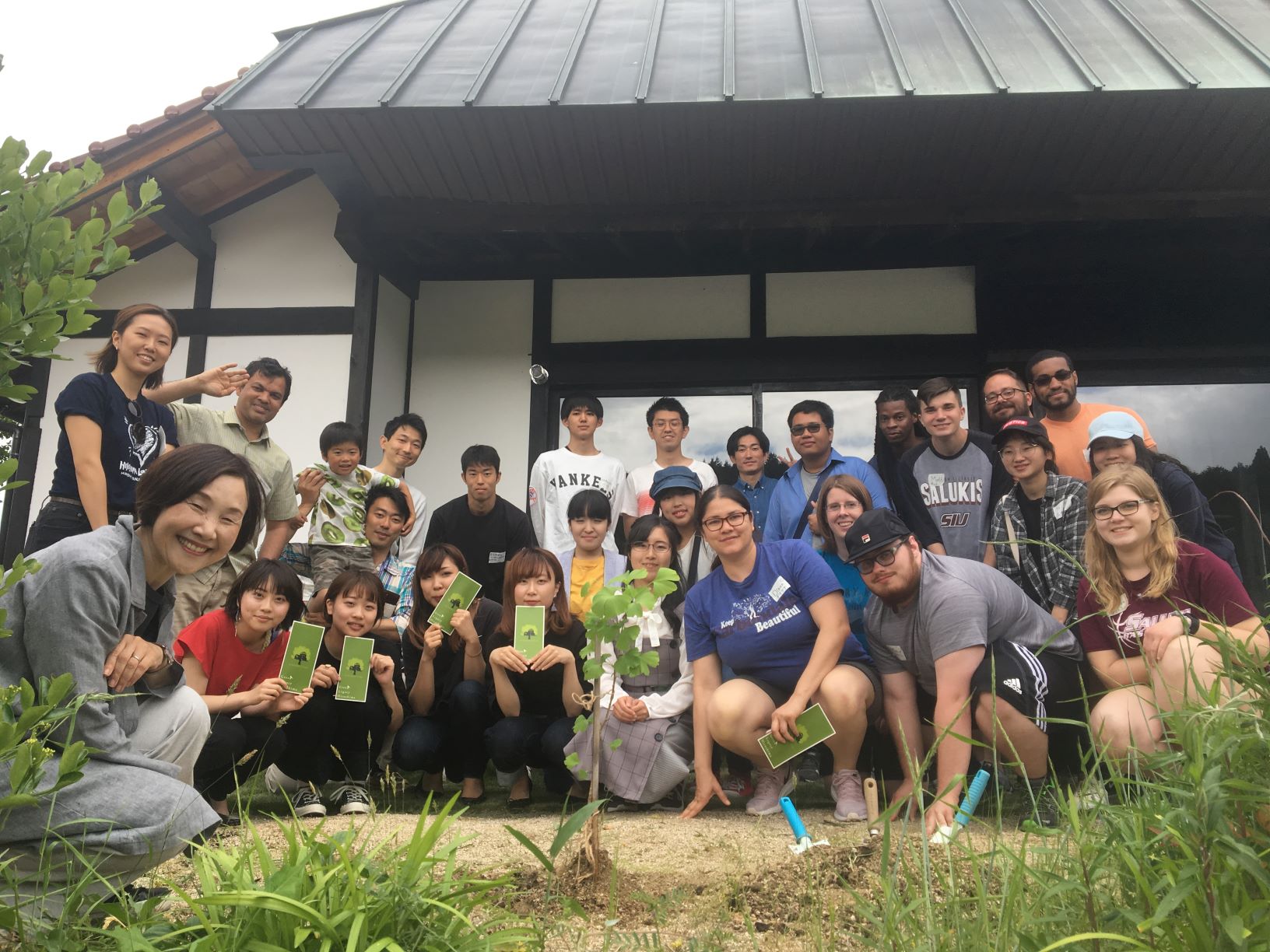 At Fukutomi Star Terrace 福富・星降るテラス in the countryside of Hiroshima, an international exchange on peace is sprouting among the next generations of college students while they experienced the rural lifestyle and learned in depth about the history of Hiroshima. A small peace exchange program leaves its footsteps on the trail to future international dialogue and global peace.

On 19 May, ANT-Hiroshima was invited to a peace exchange program at Fukutomi Star Terrace 福富・星降るテラス, a traditional Minka house dedicated to peace and community activities, renovated by Kindai University Architecture Professor Daisuke Tanigawa and his team, in Fukutomi-cho, Higashi-Hiroshima. A one-hour drive from Hiroshima City, Star Terrace is located in a sparsely-resided valley as a hidden gem, surrounded by rice fields and mountains full of green. With the conspicuous Minka features – thatched roof, doma (sitting area elevated from the floor), irori (a sunken hearth), the spacious open space reimagines the rural lifestyles and fosters a relaxing, idyllic atmosphere you can only find in the Japanese countryside. 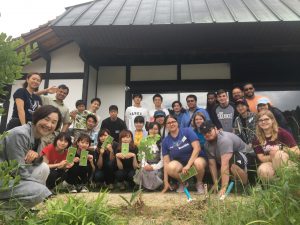 The focus of this peace exchange program is on the people. Students from the Southern Illinois University of the United States, as well as students from three Hiroshima-local universities, came together under the roof of Star Terrace. When Professor Tanigawa bought the house at first, the plan was to build a house for his family. As an architecture professor, he could not miss the opportunity to bring his students in for the first-hand learning experiences. Gradually, the project caught more attention and the Star Terrace is born as a community space.

There are many foreign students studying abroad in Japan nowadays, but many of the exchange programs can only bring students to the usual must-go cities – Tokyo, Osaka, Kyoto, Nara … Places such as the Star Terrace are a window to showcase the rich nature and pure culture of the Japanese countryside to the world. 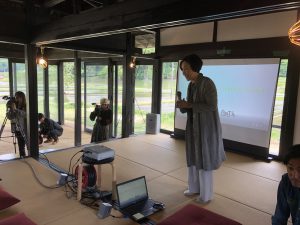 group in the front yard of the Terrace. After tasting curry rice made with a sturdy stone pot in the house, everyone was gathered outdoor for a Hibaku-Jumoku (Atomic-bombed tree) planting ceremony. Tomoko-san, Director of ANT, hosted the ceremony to settle this baby Gingko at its new home and brought together everyone for a one-minute prayer for the healthy growth of the sapling and the realization of global peace. The inspiring ceremony let many people look at the baby tree in a different light and re-evaluate the meaning and weight that the small plant in front of their eyes carries.

Then, our five-person team from ANT-Hiroshima put on a Kamishibai (紙芝居 “paper play”) show, a street-style storytelling performance, of the English-version of “The Little Messenger”. As the narrators, we read the script along with a set of illustrations and changed the images as the little ant’s journey moves forward – it tells a story of Hibaku-Jumoku in Hiroshima through eyes of a little ant while it greets all of them and delivers their messages to the Great Aunt Hibaku Ginkgo in Shukkeien Garden.

To wrap up the day, we were divided into groups for discussion with everyone mingled up – professors, staff members, not only American and Japanese students but also quite a few international students from China, Cambodia… Even though language became the main barrier to the eager exchange, it did not quench people’s enthusiasm to communicate. Some difficult but heartfelt questions were asked – “do Japanese people still hate America for the Atomic Bomb?”, “how you feel as Americans when visiting the Peace Memorial Museum?” …

People had different opinions, various levels of awareness of nuclear issues and grew up with education on peace and the story of Hiroshima in different narratives from sometimes opposing perspectives. Some students even said, as Americans, they felt they were not supposed to be here especially after seeing how much pain was inflicted onto the Hiroshima people by the Atomic bomb America dropped 74 years ago. A student from Cambodia emphasized the importance of Hiroshima’s message to sustain peace as Cambodia has suffered so much from wars.

We stated our opinions and subjectively analyzed our differences in the “peace” education we received in different countries. However, at the end of the day, we all reached a consensus – towards a peaceful future. Not only the antonym of conflicts and wars, peace is also the well-being of people and the prosperity of society. In our discussion, there was no hate, no shaming but a calm and honest exchange of opinions and feelings between people who speak different tongues – it was the most precious moment of the day.

At four p.m., Professor Tanigawa announced the program’s closing. After a long day in Fukotomi-cho, everyone was tired but had a valuable time of learning. “Look how far we have come after the bombing after these years,” an American student said to me, who aspires to become an international journalist, “college students from America and Japan sitting together and talking about peace, it was definitely unimaginable 70 years ago.”

Many people around the world are probably also curious about the answers to those questions mentioned above. What do people nowadays view the wars that happened or are happening and the tragedies that took the lives of many? What do our so-called “enemies” think about their past atrocities? These answers have to be heard from the people who are giving them. What happened in the past cannot be changed but the future is still in our hands. “Forgive but not forget” – in other words, history is not for holding grudges but for learning from the mistakes.