The Sadako Trust, Educating Vulnerable Children In And Around Muzaffarabad

In October 2005 around 79,000 people were killed and more than 128,000 were injured by a major earthquake in the North West Frontier Province and Pakistan Administered Kashmir (PAK). Several million people were left homeless by the quake. The capital of PAK, Muzaffarabad was one of the worst affected places.

In response to the disaster The Sadako Foundation was established to help children in the devastated area by providing them with basic education while seeking to impart the values that will help to build a more peaceful and tolerant society.

The Sadako Foundation also works in related areas such as health care, micro financing, environmental sustainability and so on.

The foundation was set up on the initiative of local Kashmiri professionals who also invited overseas organizations to contribute. ANT-Hiroshima was one of those organizations and has worked with The Sadako Foundation from the beginning.

The inspiration for the name of the foundation came from the story of Sadako Sasaki. What happened was that when ANT-Hiroshima published the children’s peace education book, Sadako’s Prayer, in 2006, Tomoko Watanabe, Executive Director of ANT-Hiroshima, sent a copy of the book to Farouk Azad for his daughter to read. Farouk’s daughter was moved by the book and so was Farouk, so he decided to name the foundation after Sadako, and so The Sadako Foundation was born! 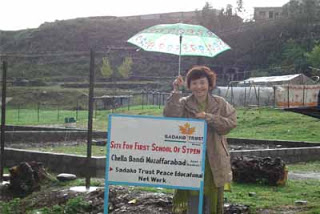 Tomoko Watanabe went on a fact-finding trip to Pakistan in 2007. On her schedule was a visit to Muzaffarabad, where she toured the site of the proposed Sadako Primary School and met local representatives and children who had been affected by the earthquake. 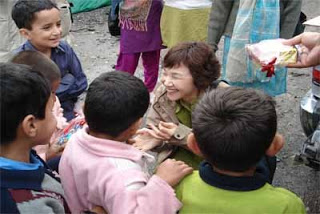 In 2008 the first Sadako Primary School was opened. To ensure the project’s viability, ANT-Hiroshima has so far donated around ¥1,200,000 and is committed to the project for 3 years (until end 2010), by which time The Sadako Foundation expects to run on a self-sufficient basis. 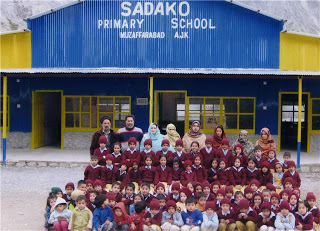 The Sadako Primary School accommodates 120 pupils, both boys and girls, in three classroooms. 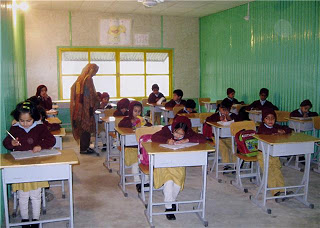