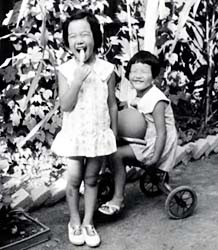 Recognize the little girl standing on the left?

Tomoko was recently interviewed by some teenage amateur journalists who put together the Peace Newspaper, Peace Seeds, which is a supplement of the Chugoku Shimbun, a regional newspaper based in Hiroshima.

Tomoko talks about her memories as a child growing up in post-war Hiroshima where “we didn’t learn about the atomic bombing at school, but we saw the terrible aftermath so often in our daily lives that we got used to living in that sort of environment.”

At college, Tomoko decided to write about the experiences of the A-bomb survivors for her graduation thesis.

I walked all over Hiroshima, listening to the stories of people who had made contributions to the history of Hiroshima. From them, and their way of living, I was able to learn so much, and acquire the courage to endure difficulties and the firm belief that we mustn’t give up.

Today, as we experience another disaster in Japan we realize that that message is as important as ever for the Japanese people.

Here is the complete article in Peace Seeds: Living As A Global Citizen