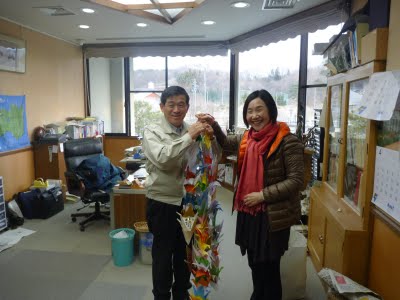 Tomoko Watanabe visited the Mayor of Iidate village, Fukushima Prefecture, as part of ANT-Hiroshima’s fact-finding and emergency relief mission to the earthquake and tsunami affected area of east Japan.

The children also wrote letters of encouragement and the mayor received them on behalf of the people of Iidate village.

Iidate village lies just outside the 30km zone around the Fukushima nuclear power plant, but since Tomoko and her team visited the area the government has decided to evacuate the population of Iidate and nearby villages because of the high levels of radiation that have been recorded in the area.