Today we mark the second anniversary of the Great East Japan Earthquake, which struck the Tohoku region and was followed by a massive tsunami, triggering the Fukushima nuclear disaster on 11th March 2011.

It was the most powerful recorded earthquake ever to have hit Japan, and one of the five most powerful earthquakes ever recorded anywhere in the world. In Miyako, the waves of the incoming tsunami reached heights of 40.5 metres.

In Fukushima, the nuclear disaster led to the immediate evacuation of nearly 134,000 residents who lived up to 20 km from the plant were evacuated. Four days later the evacuation zone was extended to 30 kilometres from the plant, causing an additional 354,000 to be evacuated.

Two years later, the debris has been cleared or piled up, but much reconstruction work still remains to be done, and the clean up operation at Fukushima will take many more years.

Our concern today, as we remember the victims and mourn for them, is for the survivors, especially the children whose lives were so tragically affected by the three connected disasters. We invite you to take a moment to stop and pray for the victims, both the quick and the dead, at 2:46pm Tokyo time or at a convenient moment for you, wherever you may be on this day. 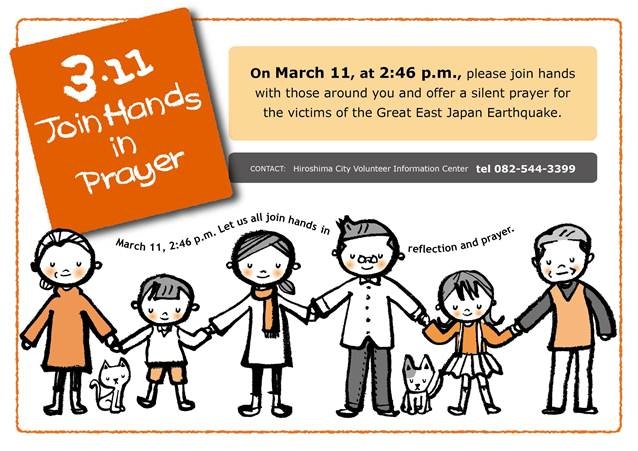 Here in Hiroshima, there will be a candlelight memorial service by the Motoyasu River in Peace Park from 5:30 to 6:30pm at the Shinsui Terrace. If you are in Hiroshima at that time, please join us.