When Time Stood Still: A Hiroshima Survivor’s Story Presented by the BBC

Earlier this year we posted a book review of Rising From the Ashes, A True Story Of Surviaval And Forgiveness From Hiroshima by Dr. Akiko Mikamo.

In her book, Dr. Mikamo uses a vivid narrative style to tell the story of what happened to her family when they were caught up in the atomic bombing of Hiroshima. The story is narrated by her father, Shinji Mikamo, who was a teenager at the time of the bombing.

Last month the BBC published Shinji Mikamo’s experience in the form of an “immersive story” in the magazine section of their website under the title, When Time Stood Still .

The story is based on conversations between Dr. Akiko Mikamo and her father, Shinji and features some extracts from Dr. Mikamo’s book, Rising from the Ashes. 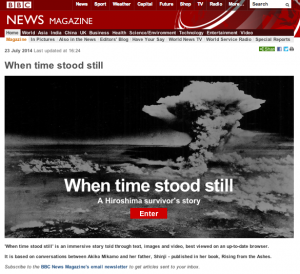