Nonfiction isn’t always gripping — but it can be. Seven months ago, I decided to learn more about nuclear weapons in general, rather than simply focus on a single instance of their use. Your average Google searches led me to the following books; all three are worth a read.

The Twilight of the Bombs 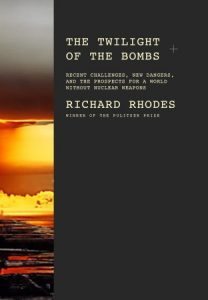 Average citizen turned leading nuclear scholar Richard Rhodes chronicles late- and post-Cold War (dis)armament efforts in The Twilight of the Bombs (2010). The book looks at a number of case studies in which nations tried to secretly develop nuclear weapons and were (usually) stymied. He also describes instances when states voluntarily decided to disarm. Rhodes, who has experience as a novelist, has a clear, engaging writing style — it at times feels more like reading an adventure rather than a history, such as when Rhodes describes literal car chases and bus-sieges in Iraq.

In addition to recounting the post-Gulf War inspection of Iraq’s nuclear facilities, The Twilight of the Bombs delves into how nuclear weapons positioned in former Soviet states were collected after the fall of the Soviet Union, South Africa’s development then abandonment of nuclear weapons, diplomatic negotiations with North Korea over nuclear technology, and the creation of the Comprehensive Test Ban Treaty, among other subjects. The book is a great starting point for anyone looking to understand the current global context surrounding nuclear weapons.

The Twilight of the Bombs ends on a hopeful note, with Rhodes asserting, “In time, possession of a nuclear weapon will be judged a crime against humanity. Such a judgement would only codify what is already an evident fact.”

The Making of the Atomic Bomb

The Making of the Atomic Bomb is the first volume of Rhodes’ landmark trilogy on nuclear weapons. It was published in 1986 and earned Rhodes the Pulitzer Prize. As one Amazon reviewer put it, the 900-page door-stopper is really two books in one. The first half chronicles prominent physicists and their research, starting around the turn of the century. Rhodes painstakingly weaves together every scientific breakthrough that led to humans splitting and harnessing the atom. The second half of the book follows the development and use of the first nuclear weapons, as many of the scientists readers get to know in part one join the Manhattan Project.

Through the eyes of the scientists — both those involved in the Manhattan Project and those who were shut out — Rhodes presents a multi-faceted look at the basic questions and contradictions surrounding nuclear weapons.

Despite the scientific focus of the book, Rhodes makes sure not to present the development of nuclear weapons in a vacuum. Along with discussing the political and military aspects of the Manhattan Project, Rhodes carefully lays out how warfare itself evolved over the first half of the 20th century, including how the mass bombing of civilians became acceptable and even desirable to military leaders.

As I mentioned earlier, Rhodes has formidable chops as a writer, and in The Making of the Atomic Bomb his symbolic turns of phrase aren’t common but never fail pack a punch. For example, the book begins with Hungarian physicist Leo Szilard describing how he realized nuclear fission was possible as he crossed a London street. Szilard only mentions the green cross light, but Rhodes closes the chapter by saying “the light changed to red.” 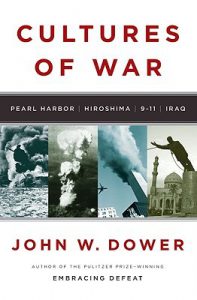 At last, a book written by someone other than Rhodes. John Dower’s Cultures of War (2010), subtitled Pearl Harbor / Hiroshima / 9-11 / Iraq, is the author’s response to the Bush administration’s repeated and surface-level use of references to WWII-era Japan after 9-11 and during the Iraq War. Dower reminds readers of the real circumstances surrounding these coded words and phrases (“Pearl Harbor,” “ground zero,” “democratization,” etc.) and posits real lessons to be gleaned from them. He examines the common themes of strategic imbecility, underestimating one’s enemy (often due to racism), and the U.S.’s alternating condemnation and use of air bombing and terror. Dower presents the U.S.’s eponymous culture of war as its belief in the infallible nature of overwhelming military force — a culture that came to maturity during World War II.

Although I had high hopes for this book — Dower’s Embracing Defeat was the first time I had thoroughly enjoyed nonfiction — the analysis ultimately felt shallow. It’s a common problem: attempting to compare two similar things and getting to the heart of neither. Cultures of War also had a fair bit of overlap with The Making of the Atomic Bomb, particularly in chapters describing the air war against Japan, so it sometimes felt like new information was in short supply.