On 22nd March a local Hiroshima network of NPOs and other voluntary organizations, including ANT-Hiroshima, set up a group called BoranEco Hiroshima. Our aim is to coordinate relief activities in the wake of the Tohoko earthquake and tsunami.On Saturday 26th March BoranEco Hiroshima sent their first truck of emergency aid supplies to the earthquake and tsunami-affected area of Tohoku in northern Honshu.

On 23rd March the group distributed leaflets to appeal to the local Hiroshima population for emergency goods and just three days later we were able to fill a two ton truck with 400 boxes of supplies.

Local volunteers were joined by about 350 people who came from outside Hiroshima to bring supplies and offer assistance. We were surprised and very happy to see so many people join us from out of town and wondered how they got to hear about our appeal so quickly. 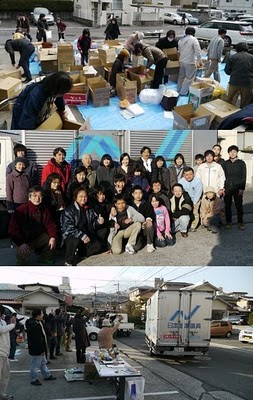 At four thirty in the afternoon of 26th March Mr. Yamamoto and Mr. Komiya headed off in the truck and, aiming to get as far north as possible before stopping for the night, they took “bento” lunch boxes with them.

Thank you to everybody for making such a great effort on this, our first Tohoko volunteer relief action.