The 11th World Summit of Nobel Peace Laureates was held in Hiroshima on 12th-14th November, 2010. Here is a video of the Peace Appeal Ceremony that was held at the opening of the final session of the summit.

Several preparatory events were held in Hiroshima in the run-up to the summit to help promote the summit in the city and beyond.

One such event, “Poster Live,” was run by illustrator Kuroda Seitarou at Motomachi Elementary School in the middle of Hiroshima. About 300 nursery and elementary school children gathered in the school gymnasium to create posters which would be displayed in community centres and other public buildings around the city to publicize the summit.

After a short talk, Kuroda-san demonstrated how to draw a poster with crayons. Then, accompanied by music, all 300 children got to work with crayons to make their own Peace Summit posters. In the photo you can see Kuroda-san and the children all engrossed in the activity. 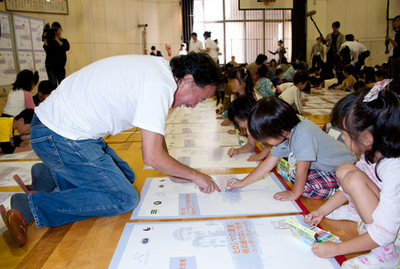 As you can see, by the end of the session, 300 original publicity posters had been created. 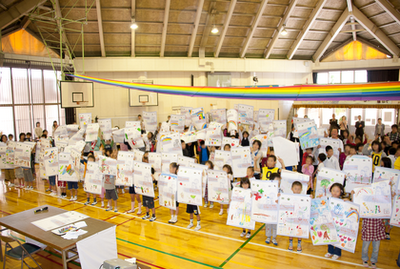 After the event, Kuroda-san joined the children for school dinner. 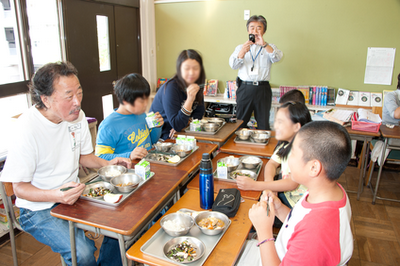