The “UNESCO Foundation – Education for Children in Need” received a donation of 9,000 euros, or about a million yen, to be used to help children in Fukushima, Japan, who have been affected by the Tohoku earthquake, tsunami and the atomic catastrophe. The UNESCO Foundation asked HOPE’87 to oversee the distribution of the funds, and they in turn contacted ANT-Hiroshima. 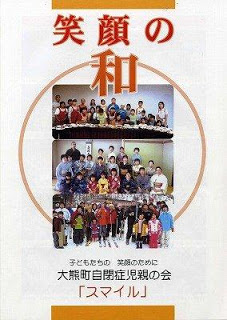 After consulting various organizations we decided to invite a group of autistic children and their families who live in Fukushima to come to Hiroshima for a holiday. The group is called “Smile“.

When Tomoko Watanabe visited Fukushima recently she found that it was not safe for children to play outside because of the danger of exposure to radiation.

The families in the Smile group wanted their children to be able to get away from Fukushima, even if only for a short time, so that they would have a precious opportunity to play freely outside in the summer.

The group travelled from Fukushima Prefecture to Hiroshima by chartered bus on Tuesday 16th August and spent their first night in Hiroshima at Hotel Aioi.

The next day the group visited Hiroshima Peace Memorial Park and the peace museum. 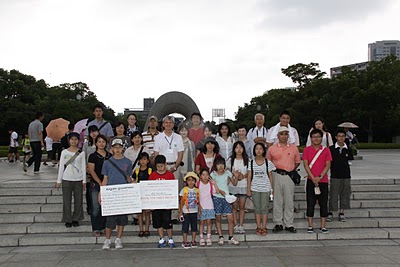 Then they caught water taxis along the river to Motomachi. 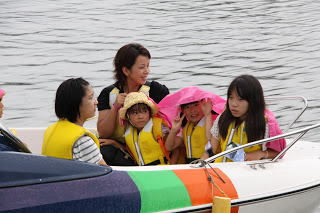 When they disembarked, Tomoko treated everybody to okonomiyaki. (“Okonomiyaki” is a popular dish in Hiroshima. It is like a pancake with vegetables and noodles.) 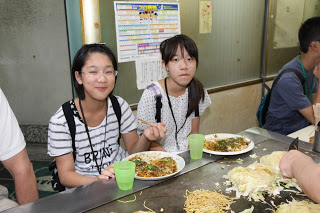 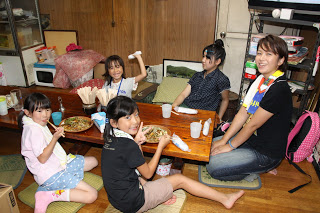 After lunch, the Smile group visited Motomachi Elementary School and met an A-bomb survivor, Emiko Okada, who told them about her experience.

The children were then treated to ice-cream before setting off by chartered bus to Kabe City. When they got there they had another treat – frappe. A Japanese flautist played the flute for them while they ate.

The group spent the night relaxing at Tawara Spa… 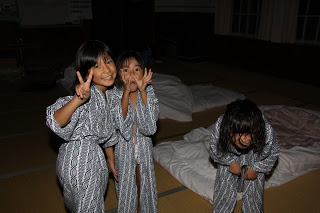 Thursday was dedicated to site seeing and fun in the countryside of Tawara. 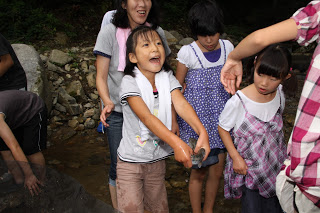 The group visited a traditional Japanese house, and then went to the river to  catch sweetfish.

The sweetfish were first trapped by a mesh net and then the children were able to catch them with their bare hands.

Later, they helped to prepare a barbeque and cooked the fish for lunch.

The children were also treated to a hillside picnic, then a snack of watermelons!

They could enjoy various activities such as catching beetles, playing badminton, bathing in the river, or simply chilling out and snoozing before returning to the spa for dinner and free activities in the evening.

The group left Tawara by bus and travelled to Miyajimaguchi, where they caught a ferry across to Miyajima Island. They visited Itsukushima Shrine and then they could choose whether to ascend mount Misen by cable car or visit the recently reopened Miyajima Aquarium. 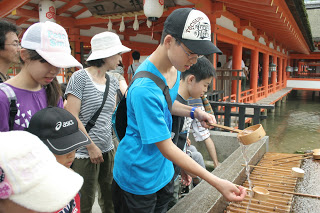 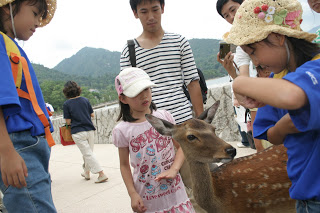 The two groups were reunited for lunch at Watanabe Japanese Inn Restaurant before catching the ferry back to the mainland and then a chartered bus to
“Marina Hop” for dinner at restaurant GUGU.

That evening the Smile group said goodbye to their friends in Hiroshima and caught an overnight charter bus back to Fukushima. 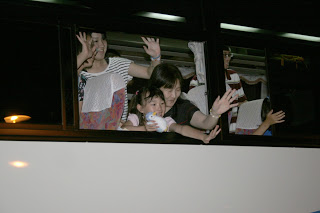 The bus was full of tired, but happy, smiling faces!