Tomo Corporation, a trading company recently set up to support the activities of ANT-Hiroshima, received some great news the other day…

Earlier this year Tomo Corporation released a film, “Hadashi No Gen Ga Mita Hiroshima” (“The Hiroshima That Gen Saw“) documenting the eye-witness account of manga artist, Keiji Nakazawa, who was a schoolboy in Hiroshima when the city was destroyed by the atom bomb at the end of World War Two. Keiji Nakazawa later created the “Barefoot Gen” manga series, which told the story of his experiences through the the eyes of a schoolboy called “Gen”. 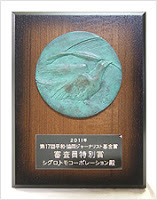 The film is distributed by Sigla who informed us that Hadashi No Gen Ga Mita Hiroshima had been won the 17th “Peace Cooperation Journalist Prize“, which is awarded by the Peace and Cooperative Journalist Fund of Japan, a Tokyo-based peace-education and media pressure group.

We feel very honoured and happy to receive this award and recognition.