An Introduction to the Barefoot Gen Manga Series by Keiji Nakazawa 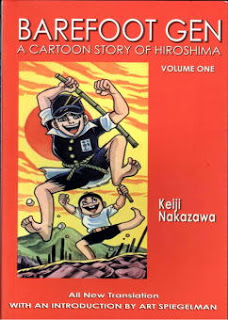 Hadashi no Gen (Barefoot Gen) is a Japanese manga story about a boy, Gen, who is in Hiroshima when the city is destroyed by the atomic bomb on 6th August 1945.

The story begins in 1945 in Hiroshima where the six-year-old Gen lives with his family. Gen lives with his father and mother and his older sister and younger brother. Gen’s mother is pregnant at the time of the a-bombing. Gen has just arrived at school when the bomb explodes. Protected by a wall, he survives and rushes home through the destroyed city, witnessing many horrific scenes of death, destruction and suffering as he goes.

When he gets back home he discovers his father, brother and sister are buried alive beneath the ruins of their house. His mother is in the street, desperate to help them, but she and Gen are unable to pull them free before they are consumed by the advancing flames.

This clip from the animated film version of Barefoot Gen shows the moment when the bomb exploded and what happened to Gen immediately after:

The Barefoot Gen manga series follows the fortunes of Gen as he survives the immediate aftermath of the bombing and struggles to build a new future for himself, his mother and a young boy whom they adopt into their family.

Keiji Nakazawa began creating manga about the atomic bombing of Hiroshima after the death of his mother in 1966. His first story, Kuroi Ame ni Utarete (Struck by Black Rain), was about Hiroshima a-bomb survivors and the postwar black market. In 1972, Nakazawa wrote directly about his own experience in a manga story titled Ore wa Mita (I Saw It), published in monthly comic compilation, Shounen Jump.

After that, he began work on Barefoot Gen. Barefoot Gen is notable not only for the graphic account of the atomic bombing of Hiroshima, but also for its criticisms of Japanese militarism and wartime propaganda. In the first volume of the ten volume series, Gen’s father is arrested and beaten up in custody for expressing anti-war sentiments and Gen has a difficult time of it at school as a result.


Hadashi no Gen has been translated into several languages and was one of the first manga to be published in English. Several film versions have also been made.

Recently, Keiji Nakazawa agreed to be interviewed by Tomoko Watanabe of ANT-Hiroshima about his experiences in Hiroshima and in the aftermath of the Second World War in Japan. The interviews were filmed and made into a documentary DVD, released by Tomoko Corporation.The film, Hadashi no Gen ga Mita Hiroshima – Hiroshima as Seen by Barefoot Gen– will be shown in Hiroshima and Tokyo at special showings during August 2011. Click here for details.

The DVD may be purchased via the Tomoko Corporation website – please note that at present only the Japanese version is available.