ICAN Treaty Coordinator Tim Wright visited Hiroshima 20-23 July 2018 at the invitation of the Chugoku Shimbun newspaper, Hiroshima City University, and Nagasaki University’s RECNA as the keynote speaker at their symposium “Opening the Door to Peace: The Treaty on the Prohibition of Nuclear Weapons and Beyond.” In addition to the symposium, Tim spoke at an event organized by HANWA and ANT-Hiroshima for members of the Hiroshima NGO community, as well as at a casual event for youths titled “What’s ICAN?” And there was another, completely unpublicized event during which Tim gave a handful of Hiroshima’s young people an inside look at ICAN’s campaign. With a focus on the latter, I’d like to expand on some of the lessons Tim shared. 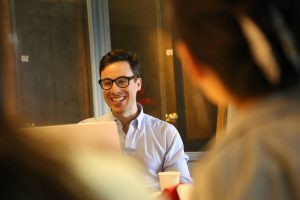 Tim offered no less than 15 examples of actions and campaign methods that ICAN and its partners have implemented over the years. Actions included educating the public on the streets about nuclear weapons, making fun videos, civil disobedience, musical performances, branding, generating one’s own media, and positive messaging through demonstrations thanking supportive governments. In addition to actions that build public attention and support, campaigners employ a number of methods for lobbying politicians, including briefings, asking them to sign ICAN’s Parliamentarian Pledge, meeting with diplomats, and always making sure to speak with people from multiple political parties.

What happens at a campaigners’ meeting? The largest meetings, which can have 500 participants or more, are usually used to motivate rather than plan. Smaller meetings, which can still include representatives from up to 50 nations, are used to generate concrete, practical tasks for campaigners to carry out in their various countries. Discussions, rather than presentations, dominate these meetings, and campaigners will often break into small groups (divided thematically or by region) to generate ideas. The importance of making meetings fun cannot be undervalued, and this can be accomplished through collaborating with artists, holding social events, or involving a celebrity guest.

One participant asked how members of ICAN work through differences of opinion. Tim advised that everyone should have a chance to voice their opinion and that, if possible, decisions should be made through consensus. Avoid voting unless there is literally no other way to move a discussion forward. It’s natural that in any given group, many people are confident that their way is the right way. Differences of opinion are easier to work through, however, when the group has clear goals and a clear division of responsibilities. When the goals and tasks themselves are unclear, personality disputes magnify. 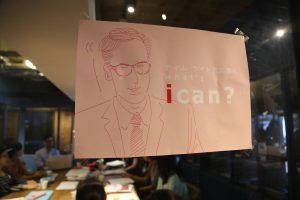 Another participant asked about the role of intersectionality in ICAN’s campaign. Although ICAN has focused goals — create a nuclear ban treaty, then make it work — Tim said the campaign consciously tries to create a diverse movement. Along with making sure campaigners don’t all come from Western countries, ICAN also highlights the connections been nuclear weapons and other systems of power and oppression, such as patriarchy or colonialism. Bringing in speakers or partners who also work on other issues expands campaigners’ understanding of the complexities of the nuclear abolition movement. (And by the way, don’t forget to check out IQAN.)

According to Tim, the US, UK, and France are actively lobbying countries not to join the Treaty on the Prohibition of Nuclear Weapons. France, for example, is pressuring its former colonies not to sign, but Tim wonders whether this might have the opposite effect. He encourages the former French colonies in Africa to sign the treaty as a group to stand in opposition to their one-time colonizer. Nations are sovereign entities and therefore cannot be told what to do by other countries. Tim (almost cheekily) noted that signing the treaty is the best way for a country to put an end to pressure from the nuclear powers.

Tim’s most powerful message was one of empowerment. He began his talk by emphasizing that much of ICAN’s campaign was organized by young people, and he concluded by saying “You don’t need to ask for permission — just do.” Everyone in Hiroshima, including but not limited to hibakusha, is in a powerful position to advocate for nuclear disarmament. And there is no reason to limit the focus of one’s advocacy to one’s own government.

In order to galvanize support for banning nuclear weapons, it is not enough to teach their horrifying reality — it is equally as important to instill a belief in each individual’s power to create change. Trying to abolish nuclear weapons by using all one’s energy to convert firm believers in deterrence isn’t necessarily strategic. Rather, there are a huge number of passive supporters of disarmament who remain quiet because they think that it’s impossible to achieve a nuclear-free world, that their voice, even if raised, would only fall on deaf ears, or that there is an impenetrable divide between themselves and their government. A strategic movement can change all that.

Every step of the process to create the Treaty on the Prohibition of Nuclear Weapons was said to be impossible. The creation of a UN working group that eventually recommended treaty negotiations, the negotiation process itself, the adoption of the treaty, and now its entry into force. “Don’t believe what people say is impossible,” responds Tim. 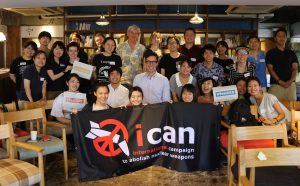